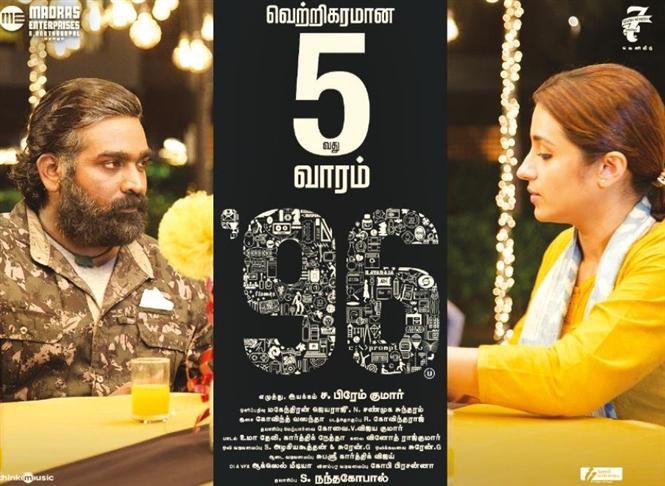 Vijay Sethupathi, Trisha starrer 96 movie which hit the screens on October 4, has turned out to be one biggest surprise hits in Kollywood this year. The feel good romantic film which has received overwhelming response from the audience as also set the cash registers ringing at the Box Office. The film has grossed over Rs. 50+ crore worldwide and has turned out to be a profitable venture for the distributors in all territories.

With Diwali around the corner, television channels have lined up various programming content with an aim to  entertain audiences to gain maximum TRP ratings. Popular Television Channel Sun TV which has bagged the satellite rights of the film recently announced that that they will be premiering the film this Diwali (Nov 6). Following the announcement of 96 movie television premiere, the film has witnessed drop in footfalls at the Box Office this weekend.

The news has shocked the leading lady of the film Trisha and many other fans as the film is having a good run at the Box Office in its 5th week. 96 movie is also doing well in neighbouring states like Kerala and Karnataka. In Chennai, the film has collected Rs. 5.45 crore till date while it has grossed around Rs. 40 crore at the domestic Box office.

Actress Trisha's made quite a bang with 96 movie and won appreciations for her role as Jaanu. Trisha took to her Twitter page to voice out her disappointment and also requesting the channel to postpone its premiere to Pongal.

Its our 5th week and we still have an 80% occupancy in all theatres.We as a team feel its unfair to be premiering 96 this early. Its our request to push it to a Pongal viewing pls @SunTV Will be grateful #96thefilm #Ban96MoviePremierOnSunTv

Director Prem Kumar, in an interview to an English newspaper, expressed his dissatisfaction. He said, "A TV premiere will be a huge blow not only to the film but also to the whole industry in many ways. We request the television channel to postpone the premiere to the next festival session, probably for Pongal 2019."

The classic 'cult' film has earned quite a fan following and many fans have expressed their disappointment by strongly opposing the TV channels decision with the hashtag #Ban96MoviePremierOnSunTv. Here's are some reactions from fans on Twitter.

Try to do support for film industry people . . This is an epic movie. Still running in theatres. . #Ban96MoviePremierOnSunTv https://t.co/G8WNFFykd6

@trishtrashers is absolutely right.
Telecasting a BLOCKBUSTER HIT like #96TheMovie when its running in all Single n Multiplexes with High Profits to all theatres is Unfair.
Deserves 50 day run🙏@SunTV should move it to Pongal. #Ban96moviepremieronsuntvhttps://t.co/dJorVCYac1

#Ban96MoviePremierOnSunTv
please don't be so overwhelmed to premier #96TheMovie on Diwali. It doesn't deserve to get premiered in just one month of its release. So please don't make cine lovers to hate you @SunTV . pls postpone it to pongal.🙏🙏 @VijaySethuOffl @trishtrashers

#Ban96MoviePremierOnSunTv
If you don't ban people will stop watching your channel. The film created so much impact on peoples heart. Don't behave cheaply for TRP