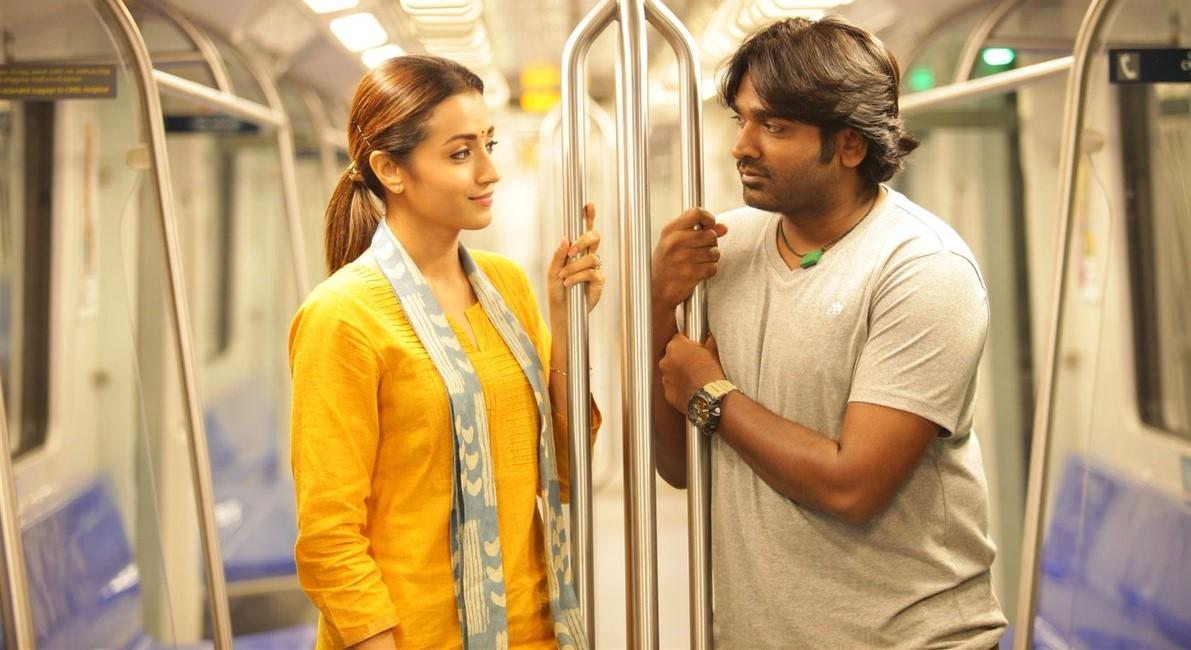 Superlative Performance From The Lead Pair In A Poetic Romance!

96 explores this fascinating aspect in a romance that touches you in a way like no other film in recent memory. It is only Love that embraces the screen throughout the runtime of '96' and has you smiling, pondering over and quite literally chokes you with emotions. (more)

Prem's honest attempt of portraying the true essence of love without taking any cinematic liberties makes 96 the kind of genre-defining film that creates a benchmark for many years to come. A must-watch movie!(more)

96 taps into nostalgia to leave us with a high that only happy associations with our past can evoke.

The actors who play the younger Ram and Janu - Adithya Bhaskar and Gouri Kishan - are equally good. As for the lead actors, there is a lighter moment when Janu asks Ram if he is a virgin, and calls him an "aambala naatukatta". The reactions of Vijay Sethupathi and Trisha in this one scene are a sample of their fantastic chemistry. Their understated performances complement Prem Kumar's storytelling lyricism, and creates magic.(more)

To put it in simple words, 96 is a breezy and heartwarming romantic tale that Tamil cinema audience shouldn't miss. The entire team of 96 have come together to throw some positivity to the audience(more)

The climax of 96 should actually melt everyone's heart. The greatest love stories are the ones that make you root for the protagonists to come together, despite their destinies. This is one of the best films in a long time. It will make you laugh and cry and we insist that you watch it.(more)

The soul of 96 in Govind Menon's soothing music. Kadhale Kadhale was an instant favourite and its placement in the film is just magical to watch. Bagavathi Perumal, Aadukalam Murugadoss, Janagaraj, Devadarshini and her daughter have given their best. 96 is a poignant romantic tale of Ram and Janu which will make you nostalgic. Director C Prem Kumar's 96 starring Vijay Sethupathi and Trisha is a tribute to unconditional love. With brilliant performance backed by a strong script, 96 is a winner, says our review.(more)

The film has a lingering touch and feel of Cheran's Autograph (2004) and Thangar Bachchan�s Azhagi (2002). The only drawback of the film is its length - 157 minutes - which is too long for a walk down the memory lane. It is a casting coup of sorts where Vijay Sethupathi and Trisha play matured lovers, and that has worked to the advantage of the film along with the actors who play their younger selves. The supporting cast of Devadarshini, Bhagavathi Perumal , Aadukalam Murgadoss who appear as friends are perfect in their roles. On the whole, if you like romance, 96 is pure magic.(more)

Prem's efforts milk the adoration of the main characters to the point where it feels a bit repetitive at times. Vijay sails through the film effortlessly in his role and Trisha also aces her performance as a married woman who can't stop indulging in emotional infidelity.(more)

The only problem is the slump in the second half. (The film feels bloated at 157 minutes.) One reason is surely that the anticipation around Ram meeting Janaki is more dramatic than the actuality. Also, the Ram-Janaki conversations in the second half become monotonous, revolving around their parting and their longing, when - given the unsentimental nature of the film - they could have included detours into his work, or her life in Singapore. But the premise is so affecting, it keeps us invested(more)

A fun and lovely ride that will no doubt make you reminisce your old school day memories.

The narrative flow throughout is poetic and sweeps us off the feet with realistic narration and close-to-the-heart sequences and, at no point does the film lose its momentum with the love angle turning out to be eternal here. Premkumar has presented 96 so well with a character-driven narration as it gives a solid and strong foundation to the plot.(more)

A Poetic Love Story that will unlock your memories

Go for this fascinating love story that will take you on a tear filled happy journey down your memory lane.(more)

A Soulful Romantic Tale With Its Heart At The Right Place!

Here is one such movie that will linger on in your minds even after coming out of the theatres. 96 is indeed a refreshing experience and the movie underlines the fact that a romantic tale could be soulfully narrated without clich�s.(more)

There is a lot of things to keep in mind that the sequence, love, separation, rejoicing of the recurring junction, is more than just how much of it is a movie. The things that our friends are trying to smuggle out of old love are all right in the movie. This 96 is definitely an experience with an experience rather than a picture.(more)

A Fulfilling Tale Of Love And Longing

Early in the film, Ram looks at a small bridge with an ache in his face and heart. Jaanu and Ram never cross that physical and the metaphorical bridge and these songs remain incomplete as an ode to them. The other curious thing Prem Kumar does is with his casting. In small but significant roles, he casts Janagaraj and Kavithalaya Krishnan. While this writer cannot speak for others, these decisions do go a long way in creating a throwback, again, in our head.(more)