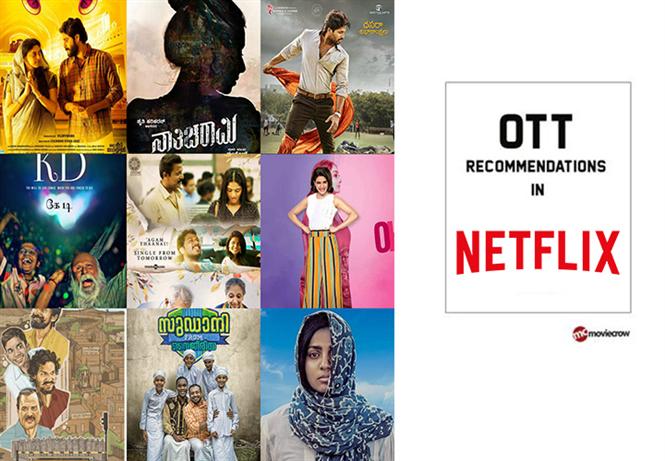 Listed below are few South Indian film suggestions (in no particular order) that are available in Netflix!

This anthology of super sweet love stories has the power to positively influence your take on life. Your smile is intact right through the film and could possibly stay on for sometime to come.

Trivikram's Ala Vaikunthapurramuloo is the kind of film that you want to watch to have a gala time. An age old plot and a done to death narrative but the film works because it precisely knows what it wants to do and does it with all earnestness.

A poignant take about a widow who is unable to get over the thoughts of her late husband and her physical needs add on to her turmoil.

So when was the last time a thriller/horror movie had so many layers to it? A rivetting watch that also leaves you contemplating for a while.

A truly unique and original film that shows what a filmmaker with a hold over the medium and a very peculiar signature can do. Could even turn out to be a philosophical treatise for you!

The simplicity of C/O Kancharapalem bowls you over.The film is never judgemental but you invest your time in the film and it could gently impart certain values in the most unassuming manner possible! In case you feel restless at any point,have faith and watch, as a terrific climax ensures that you look back at the entire experience in awe and it also entirely changes your perception of the film.

Parthiepan's experimental venture is fairly engaging and is surprisingly entertaining given that it operates with the constraints imposed upon itself. If holding your attention with just one man on screen was the motive then this one definitely achieves it.

A sensitive portrayal of a bond that develops between two people who are at the extreme ends of the spectrum of lifespan. Madhumitha keeps the melodrama delightfully under check.

Taramani touches upon a lot of things but at heart it is an intriguing journey into the male psyche.Ram manages to keep it engaging and fairly entertaining!

In Goa and in desperate need of cash, four childhood friends get another shot at making their long-abandoned dreams of becoming filmmakers come true.

Pandigai is a gripping film mounted on an interesting backdrop and is one of those underrated or lesser known films that deserved more!

This is one crazy and unique movie watching experience! Sometimes films aren't only about stories but what they do to you when you are watching them. This one gives some adrenaline rush!

Malayalam makers often do not take a moral high ground for you to learn from the films of theirs. What they tend to do however is more powerful. They hold a mirror to your conscience. Sudani from Nigeria is one such slice of life drama that is an emotionally fulfilling experience.

A light hearted drama about an elderly woman regaining her youthful days and the repercussions this has on the people around her!

An aspiring pilot fights for her future -- and justice -- after surviving an acid attack from her abusive boyfriend.

Looking for a Amazon Prime list? Here you go