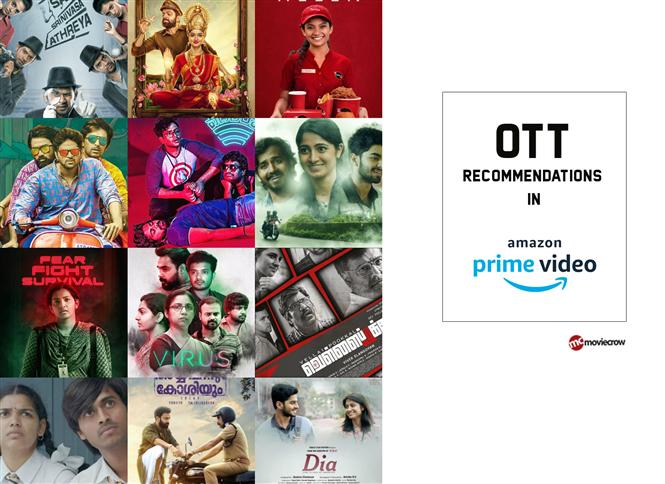 Collated below is a list of interesting films that can be found in Amazon Prime Video. The list could be endless, so this is a collection of South Indian films that had released over the past year in no particular order!

Probably the most relevant film in these times. Aashiq Abu's film based on true events (Nipah outbreak in Kerala) is almost a docudrama but also never misses out on being a cinema with characters whom we care for.

Backed by terrific performances and assured filmmaking, this hauntingly beautiful film leaves an impact that would take a while to subside.

The first 30 minutes is one of the most tense stretches in cinema from recent memory! Close on the heels of Driving Licence, this is another battle between two bruised male egos.But unlike the former, the demarcation between good and evil is more clear here but the film doesn't really take sides. Also both the sides here are heavyweights and after a point you sense that they are almost enjoying the battle and keep extending the foreplay before the final orgasmic rush. Both Biju and Prithviraj are terrific and the mass moments work big time.

A sweet little film about an introvert trying to gather courage to profess his love. Debutant director Ravi Kiran Kola makes an impressive debut and leaves a mark as someone with strong visual aesthetics as the camera pans over the picturesque locations of Godavari.

A heartwarming film about unconditional love that bowls us over with its earnestness.

A refreshing mainstream film that scratches beyond the surface of the emotion called love and imparts the right ideas about it. It isn't about attaining a person but standing up for them and standing by them through their thick and thin. This is another film that really did not get its due during the theatrical release.

Devoid of cliches, this trippy comedy thriller is a solid attempt from a young team that is enjoyable and warrants attention.

If you are game for a unique experience, this Rakshith Shetty starrer takes you on a ride that could be overlong but fun nevertheless.

What happens when two genuinely good men end up fighting each other when their self respect is punctured? Another film from an industry that knows that there are stories all around us that can make good cinema.

A survival thriller that has us invested right through as it ensures we have an emotional connect with all its characters. Instead of preaching, there is this wonderful message in how the staunch Christian father character (played superbly by Lal) becomes accepting of his daughter's boyfriend from another faith when the latter doesn't run away but stays back in the hour of need.

Gantumoote is one of those rare films that looks at love solely from the girl's point of view. This stunning slice of life take on teenage romance that is cheerful and poignant in equal measure is that rare gem that you ought not to miss! The protagonist's words before the end credits roll goes as follows, "I feel so FULL and EMPTY all the time". And this is how you feel at the end of the film as well, having virtually been with her for close to 2 hours.

A likable fun film that is whacky as well as simple and endearing. And that wildly imaginative twist is something that you don't see coming!

A wholesome entertainer for the kids that gets its priorities right and is neatly executed.

An efficient and well made whodunit with an in form Vivek at the forefront. The climax cliches it, in case you feel restless at any point before that.

A neatly made investigative drama that packs in a lot but also leaves out a bit. But a rewarding watch nevertheless.

A terrific Naveen Polishetty shines in this whacky investigative thriller. Another film that eschews all the cliches that you would associate with a typical Telugu mainstream film.

Mamooty delivers a masterclass in Ram's poetic take on unconditional love! There is every possibility that Peranbu could make you a better person and look at life a little differently.

A film that deserved more love at the theatres. The anti caste narrative is effectively presented in an engaging outing. While the ticking bomb in the film acts as the metaphor for caste that needs to be gotten rid off, hopefully atleast a few can self introspect in these testing times of Covid 19 and get rid off their own fallacies.

Obviously there are many more including popular mainstream films that are available in the platform. To list a few in Tamil - Asuran, Bigil, Viswasam, 100, Suttu Pidikka Utharavu, Jiivi, Aadai, etc