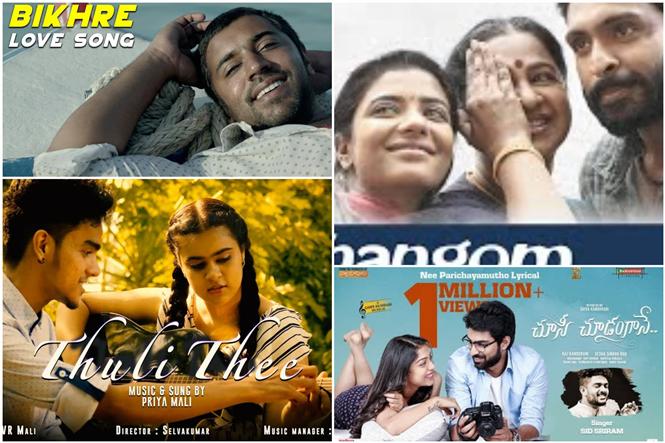 Sid Sriram and Shashank Arora’s debut compositions in Tamil and Hindi respectively easily tops the charts in the music scene this week.

Vaanam Kottatum (Tamil): Sid Sriram: Kannu Thangom: Sid Sriram debuts as a composer in Tamil in Maniratnam's production house and the first single is in the composer's comfort zone, a beautiful bluesy track which instantly reminds the listener his debut song as a singer Adiye. The tune doesn't follow any structure with the minimal sounds in the background and the tune around the Thaniyile phrase is gorgeous. Shakthishree Gopalan enters in the second half and steals the show.

Moothon (Malayalam/Hindi): Shashank Arora: Bikhre: Shashank Arora's debut music is the beautiful guitar-laden track and sung by the composer himself. The soulful tune is accompanied by the serene and simple backgrounds arranged and produced by another talented composer Sagar Desai. The caressing vibe of the strings gives an immersive experience to the listeners.

Venky Mama (Telugu): Thaman S: Yennallako: Thaman once again in the retro mood for Venky Mama after the lovable Disco Raja song. Though this doesn't work as the earlier song because of the insipid tune to some extent, Thaman's arrangements is a clear winner especially the funky 90's rhythms in the background. Prudhvi Chandra ably manages to salvage the tune with his vocals.

U1 Records (Tamil): Priya Mali: Thuli Thee: Yuvan continues to promote independent musicians in his youtube channel and Thuli Thee is the latest one. Priya Mali who sang for Yuvan Shankar Raja's earlier composes this enchanting track and the consistent thrumming effect in the background blends well with the haunting vocals of Priya Mali.

Mundina Nildana (Kannada):Jim Satya: Naguva Kalisu: Jim Satya who worked as a music producer with AR Rahman, Pritam and others make his composing debut in Kannada. The song starts off in a soulful Ananya Bhat's vocals turns into predictable grungy melancholic rock track.

AmruthaRamam (Telugu): NS Prasu: Naalo Neevey: Krishna Nee begane Baro paves way for the beautiful yaman Kalayani based pallavi while the arrangements are consistently enjoyable while the charanam portions turned out much better with the kedaram based Raaga I think. Chinmayi Sripada aces the rendition as usual.

Choosi Choodangaane: Gopi Sundar: Nee Parichayamutho: Sid Sriram is on a roll this year and Gopi Sundar gives the singer another lovely song with the classical touches. The tune is quintessential Gopi Sundar one and the track reminds us of the composer's earlier compositions. Composer throws in fantastic sax pieces in the interludes.