Anjaan is the much awaited movie from Suriya and Lingusamy combination.The movie also boasts a number of recognizable names -- Santhosh Shivan, Yuvan Shankar Raja , Samantha and Vidyut. Does this strong team give the 'bang' for your buck?

The story is set against the familiar backdrop of Mumbai. Lingusamy's attempt to create a "Badshah" out of Suriya has missed the mark. The story revolves around 'Raju bhai' played by Suriya who commands respect and fear in equal measures among the people of Mumbai. This half-baked don tale supposedly loaded with twists, turns, loyalty, treachery, risky action sequences ends up being a stale affair due to poor screenplay. Lingusamy's writing is a big let-down with scenes and twists along predictable lines. The writing department and script are weak while punch dialogues may evoke unintentional laughter.

Suriya tries to salvage the movie without much luck. On the positive side, Suriya shows good difference between the two characters. In scenes prior to interval block, Suriya partially succeeds in pulling off a Vishwaroopam style transformation sequence. Suriya's struggle to carry a movie on his shoulders without a compelling script is evident throughout.

Surprisingly, there is no female character other than Samantha. There are half a dozen of villains but none of them is menacing. Vidyut's lip sync is off and his all important characterization pivotal to the story is a big miss. The scenes portraying Suriya and Vidyut's towering friendship also fail to click. A number of characters in the movie are hardly recognizable. You can't help your mind going numb as you see Suriya bashing up so many villainous guys in the movie without a sense of motive nor purpose.

Yuvan Shankar Raja's songs are average. Yuvan's rerecording is hardly distinguishable and sounds like his standard template BGM. It is unfortunate that the songs are not enhanced by cinematography nor choreography in the big screen. Another master who feels uninspired is Santhosh shivan. His work can be termed as average at the best. The making of the movie itself feels rushed.

Lingusamy has been producing and distributing a number of gutsy experimental movies in Tamil. However, his Anjaan compensates for the goodwill generated through such numerous movies in the past. It is unfortunate to note that Anjaan may be Suriya's weakest offering in the recent times despite a lot of hard-work. 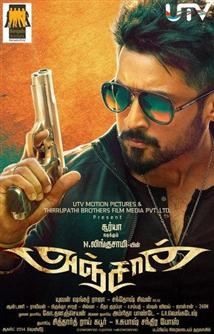