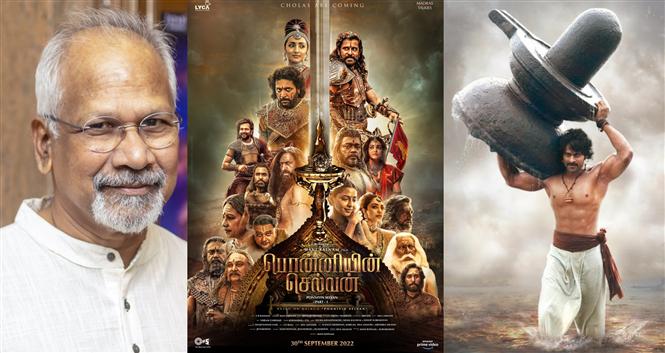 Mani Ratnam directed Ponniyin Selvan: Part 1 which is based on Kalki Krishnamuthy's novel of the same name released in multiple languages today. PS1 (as the film is known for non-Tamil viewers), seems to have particularly come under the bash-radar of its Telugu audience who have taken it upon themselves to compare it to SS Rajamouli's Baahubali movies starring Prabhas in the lead.

Such comparisons existed prior to PS1 release as well and director Mani Ratnam had stated back then that the success of Baahubali movies is a major boost for anyone, who wishes to take big budget period dramas. This was wrongly interpreted by a section as Mani Ratnam stating that the Ponniyin Selvan movies are inspired from the Baahubali movies [because the director used the word 'inspiration' for putting forth his point].

"Ponniyin Selvan is (about) Raja Raja Cholan. He is one of the greatest Kings of Tamil Nadu. So when you deal with (a story about) him, one has to deal honestly. So it (the movie) has to be realistic and the characters surrounding him also have to be real. The story is told through the eyes of Vanthiyathevan, who is a common man like us. The story travels through him, the royalty he meets..So this (Ponniyin Selvan) is a realistic creation. It will not have a fantasy world like Baahubali. Will not have superheroes. (PS1) will be much more down-to-earth. Everything will be in that tone - Be it the music, the locations, the visuals.

(Ponniyin Selvan) will have dirt, will have mud..This is not just telling a story about that time period (10th century)..Like Kalki, we are taking the audience to that time period. So it has to seem like (the incidents) happened during that time, it has to be realistic. So both (Ponniyin Selvan and Baahubali) are totally different genres. Both are historical but that (Baahubali) is complete fantasy, complete liberty and extraordinarily made.

This (Ponniyin Selvan) is not like that. It's realistic, it deals with drama. It deals with human emotions and values."

they're all about different things, appreciate the artistic elements of each film and keep it moving