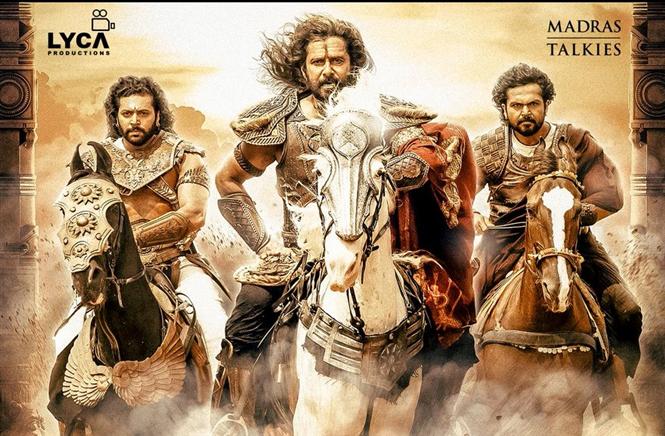 While art itself is subjective, the extent of variation becomes more prominent when it comes to movie adaptations of novels. For those familiar with the source material, it certainly is close to impossible to refrain from drawing comparisons in their mind. It is a constant battle between the images you have in mind and what is presented on screen. Mani Ratnam’s Ponniyin Selvan (2 parts) takes up the herculean task of adapting a novel that runs for five volumes with over 2000 pages. So, a lot of creative liberties are bound to be taken in what is a highly condensed version.

We have a voiceover (as in the trailer) explaining the history that leads to the chain of events in Ponniyin Selvan: I. There is a silent power struggle happening in the Chola Kingdom and we are pulled into this battlefield. It is not one that involves warring men with swords on either side but a battlefield that has power hungry and scheming men and women devising cunning plans sitting inside forts and palaces.

PS 1 focusses on introducing the primary characters and their equations with each other. The film is predominantly driven by plot points, and we are only given a briefing behind the emotions that is driving the actions of these characters. For those familiar with the book, it is bound to be a little disappointing but ironically, they have the advantage of filling in the gaps. But for those who haven’t read the novel, I am not sure how much of an impact PS 1 would have as a drama.  For a drama to work, you really need to be invested with the characters and their emotions.  With the lack of time to establish this, Mani Ratnam opts for a fast-paced narrative where the action quickly jumps across places. The film breezes through nicely whenever we have Karthi on screen as Vallavaraiyan Vandhiyadevan, the sweet-talking spy with a visual appetite for women. Karthi is really good here. He plays someone who actually does over the top things with a mischievous grin. This is a very difficult thing to do. If he keeps it too real and simple, it could be boring and take away the essence of the character. If he goes overboard, it could end up being annoying. But Karthi gets the balance spot on. Among the other actors, Aishwarya Rai gets it right as Nandhini with her presence. The book keeps describing a lot about her, (predominantly her physical attractiveness) every time it focusses on her. This is a spot-on casting decision, given the kind of image we already have about the actress. And the actress makes Nandhini work. The others have relatively lesser to do or have lesser screen time in PS 1. Everyone fits the bill, but I guess one has to watch the second part as well to see how much of an impact they make in their respective characters. I was pleasantly surprised by Sarathkumar though. Vikram showcases his inner turmoil effectively in that scene where he recollects a crucial event from his past.

The film never touches a dramatic high except in that little reveal leading to the sequel. Creative liberties and constraints aside, the scene between Nandhini and Kundhavai should have really worked much better. Since the kind of animosity that these two characters have for each other is hardly established, this scene passes off without the fireworks it should have created. The whistles in the auditorium were for Aishwarya Rai and Trisha and certainly not for the face-off between Nandhini and Kundhavai. And the introduction of Arul Mozhi Varman is such a nice ‘mass’ moment in the book. What we have here is a very generic introduction (war scene) for the character. Similarly, one interesting aspect of Vandhiyadevan in the book is that he keeps getting into trouble inadvertently and this also helps him to gather crucial information from unexpected quarters. But here he is just carrying out the instructions given to him. Yeah, I get it that some of you might get annoyed with these comparisons with the book, but I really thought that these aspects could have been incorporated better.

A.R. Rahman’s songs really work well. The visuals too are pleasant. The war sequences don’t create much of an impact because of the absence of an emotional involvement in our part. They come across as perfunctory action episodes.

Your experience could largely vary depending on your familiarity with Kalki's novel. PS 1 is largely condensed, and plot driven. So, the emotions of characters and the significance of crucial events don’t register as impactfully as one would have liked. But it also has some other things going for it. It delivers on the joys of watching a big scale movie with a studded star cast. Most importantly, it remains engaging despite the lack of high moments and has us anticipating the second part!