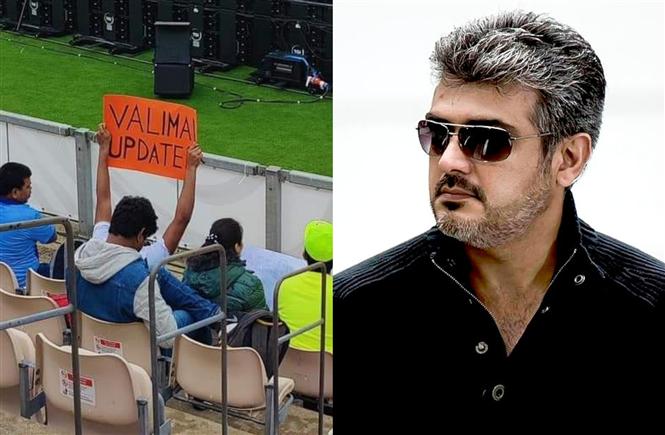 The first look of Valimai, Ajith's long-awaited movie was expected to release on his birthday in May this year but the makers refrained from the event in lieu of the new wave of COVID-19 pandemic. Even before that, eager fans had a running joke amongst them where they would pop-up with at random places, asking for 'Valimai Update'.

Cricket grounds, election rallies, even posters addressing producer Boney Kapoor - Valimai Update frenzy amused quite the crowd before Ajith himself requested a full-stop to it. Now, the mania is back and this time a fan was spotted holding a Valimai Update placard during the India Vs New Zealand Test at Southampton.

Tamil cricketer R. Ashwin was targetted once again with the question (as he was during the India Vs England Test at Chennai) but the player sportingly smiles it off. Added to this, the Mannargudi MLA T.R.B Rajaa joined the joke by asking for a Valimai update himself and cracking a political joke about it.