Meaghamann - Promises More Than What It Achieves

Meaghamann - Promises More Than What It Achieves

Magizh Thirumeni’s first two films bore his unique stamp and were quite different from each other. His latest offering Meaghamann is more inclined towards his previous film Thadayara Thaakka, a riveting actioner that caught the attention of film buffs.

With absolute no attempt at sugarcoating, Meaghamann is an intense action drama revolving around drug trafficking in Goa and the attempt of few sincere cops to bust the network.

Magizh Thirumeni gets the basics right. The intensity of the drama never really gets below the threshold. With the no nonsense attitude that the hero goes about his routine you definitely know that the villains are going to bite the dust. But he does not have it easy and the odds only keep stacking up and so does our interest. There are numerous characters and enough interesting scenes that keep changing the course of action throughout. This is quite really an achievement given that the identity of all the characters is revealed quite early on and there is no attempt to manufacture a twist. All these numerous characters are quite well interlinked too. Just as you were wondering what Sudhanshu Pandey’s character is doing in the film it all makes sense in a superb twist in the second half.

Arya needs to look macho and have a grim look for the most part and he does this convincingly. Hansika’s portions are a mixed bag. They hurt the flow of the film and Arya playing pranks on her in the middle of all the tension looks far-fetched. There is a scene as the credits roll that probably justifies Arya’s behavior towards her. He yearns for a simple life like the one she enjoys where her biggest worry is for the most flimsiest of reasons and here he is, moving around with the most inhuman of mankind. But in a film that is essentially a raw actioner this philosophy does not really register.

The mass moments in the film click. As always the lead up to these moments are what do the trick and that has been take care of. But what hurts are the action sequences that follow. It all happens too easily and too fast. For a mafia that operates with utmost caution behind even every half step, the climax with the henchmen with no gun at their disposal and coming in turns to get beaten up is a mockery.

There is an extensive torture scene before the intermission that could make stomachs churn and reduce the sales of popcorn at the intermission. Given a choice whether your kid can watch this particular stretch or a hardcore adult material, a majority would probably opt for the later. Almost bordering on torture it baffles you that the film has got a U/A certificate.

Meaghamann is an engaging action drama that unfolds with interest. But the ease with which the hero vanquishes his nemesis in the climax leaves you with a half filled stomach. 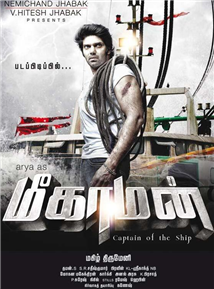