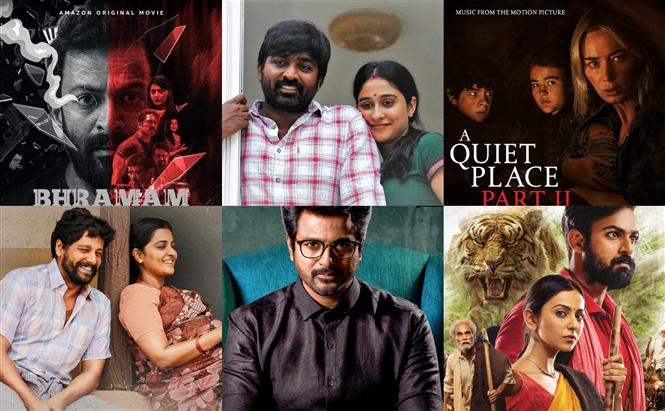 Theaters in Tamil Nadu had their hands full this week new and first-time releases whereas OTT platforms had their share of significant premieres. A look into how the movies have fared this week:

A minimalist film that is in-between a short and a feature, Mughizh starring Vijay Sethupathi, Regina Cassandra is about the importance of conversations between parents and children about sensitive topics. An impactful watch. (Movie Review)

Kolamaavu Kokila director Nelson Dhilipkumar is back with another dark comedy thriller, this time with Sivakarthikeyan at the front. The film has opened to good response from critics and audience and revolves around an army doctor who helps his love interest's family to find their kidnapped daughter. (Movie Review)

Streaming on Zee 5, this new film revolves around the abduction of the bulls by a money lender and the journey of Vidharth, Remya Nambeesan's characters around it. Directed by Vetri Duraiswamy, it shares one too many similarities with Vellai Yaanai and Raame Aandalum Raavane Aandalum and that has worked against the film.

Directed by Krish Jagarlamudi and starring Panja Vaisshnav Tej, Rakul Preet Singh, Konda Polam is a coming of age story of an educated youngster who comes from a family of shepherds. It pivots around how he overcomes his perpetual fear amidst lush green forests and makes for a decent one-time watch.

The movie officially hit the Indian theater screens this week and picks up the morning after the first film, A Quiet Place ended. The Abbot family minus the father are still in a post-apocalyptic world inhabited by blind monsters with an acute sense of hearing and A Quiet Place 2 plays out a smart continuation of the family’s journey ahead. A must watch on big screens for the pure thrill.

The Malayalam version of the superhit Hindi movie Andhadhun, Bhramam starring Prithviraj Sukumaran seems to have recreated everything down to a T. Which is perhaps why there is a linger of indifference around the movie, which is streaming on Amazon Prime Video.