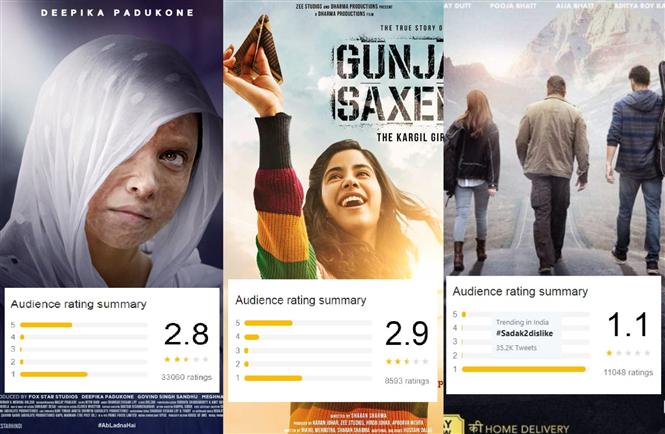 The grim in Bollywood at the moment is alluded mainly to the disdain expressed constantly on social media by the general movie-watching public. While genuine problems such as false-propaganda, emotional lynching and career-bullying were addressed initially with respect to the death of an actor, the public wokeness soon took a sudden dive of blind hatred.

The trend really started with Deepika Padukone's Chhappaak when a majority of the Hindi speaking crowd took offense to her visit to a controversial college campus and spited her by leaving 1-star ratings on well acclaimed movie pages. The 'public' chose to disregard Vikrant Massey's powerful acting, Meghna Gulzar's impeccable direction and more so a real-life acid attack victim's inspiring story. [Chhappaak was given a decent critical rating upon release and objective audience liked the content if not loved the movie]

This same targeted negative ratings has now made a comeback for Netflix release Gunjan Saxena with the objective of blocking Karan Johar (for his alleged involvement in the sidelining of Sushant Singh Rajput) and Jhanvi Kapoor, who they believe is a pure-product of nepotism (she has proved to be otherwise in her latest release). The audience seems to have completely missed that Gunjan Saxena is a good watch and these 1-star ratings are also affecting powerhouse performers like Pankaj Tripathi and rank new talents like Sharan Sharma, who has done an impressive job with the movie.

Not to mention the restriction this blind hate brings in, obstructing a real life Indian woman's story from reaching a wider set of viewers. The biggest irony in this situation is the 'Uninstall Hotstar' campaign; the same people who praised the OTT platform for making Dil Bechara free for viewers are now vouching for the app to be uninstalled because of Sadak 2. [Problem with Sadak 2]

Enthusiasm in demanding and working towards justice may not be a sin but the trend of letting be clouded by non-objectivity comes across as toxic.