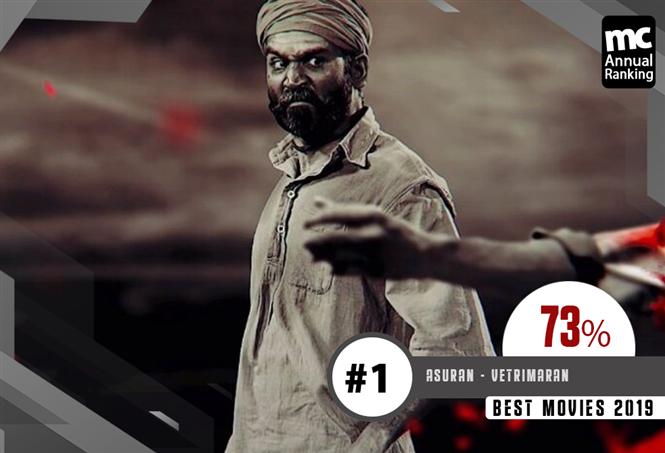 Among the Tamil movies released in 2019, based on the cumulative of critical acclaim, popularity among the audience. we have listed films that have surpassed an aggregate rating of 60+ rating at moviecrow.com

Find below MC's annual movie statistics, for the year 2019.

The duo which gave 2018's best movie was back this year, incidentally to only give 2019's best Tamil movie. Vetrimaaran's gripping revenge drama with Dhanush raked up the acclaim in all departments and went on to become the crowning jewel in the second half of 2019.

October ended up giving this year's top two films and this Lokesh Kanagaraj directorial which was made and publicized with minimal production is one of them. An extremely entertaining action-story, Kaithi was also among this year's most-viewed movies in theaters and OTT platforms.

An unusual array of stories having an interlink to each other, Super Deluxe was this year's boldest film with strong performances by Vijay Sethupathi, Bagavathi Perumal, Samantha, and Ramya Krishnan. Thiyagaraja Kumaraja made one for the books this year.

Remember the Oscar-winning screenplay of Her which featured only Joaquin Phoenix, the voice of Scarlett Johansson and a handful of characters. Prathiban's Oththa Seruppu is a similar concept featuring only him and a handful of voice characters in a 'Paapanasam-type' set up, where the hero despite not coming from a lot puts up an impressive display of intelligence to get away with murder(s). The movie and Parthiban definitely had their moment this year.

An unusual tale ensuing a senior citizen on-the-run from death and an orphaned kid, KD was 2019's surprise card that ended up pushing all the right buttons. Mounted on lots of laughs, the film gave tough competition to its commercially viable contemporaries.

Newbie director Athiyan Athirai presented a fictional story of the working-class which was based on true incidents post World War II. Right from the story to performances, music in the film and even its publicity designs, Gundu awed everyone with its unique concept and interesting presentation.

This year's late yet latest film to find its way to the top rankings is Halitha Shameem's love anthology which pans people of all ages. A feel-good drama which got the audience hooked due to its heart-warming appeal.

A movie which turned a lot of heads even before its theatrical release [casting of a trans-model as one of the leads being one reason], the combo of director Ram, Mammootty and Yuvan Shankar Raja gave us a heart-wrenching story of the evolving bond between a disabled daughter and her single father. Few to no Tamil movies had explored this subject in the past, making it a crowd-vower when released.

If Happy Death Day was a black comedy slasher film, Game Over was a mix of psychological thriller and slasher. The film by Ashwin Saravanan had people guessing the genre and what the story-line actually meant, yet raving about the entertaining content.

A remake of Shoojit Sircar and Aniruddha Roy Chowdhary's Pink, Nerkonda Paarvai ended up being the topical movie 2019 required. A commercial star like Ajith shedding his 'mass image' for a social drama was welcomed by one and all, with the movie reiterating the meaning of 'consent' and pin-pointing the prejudice shown to women.

Arun Vijay was seen in a double role in one of this year's highly engaging mystery thrillers. A murder crime between a set of identical twins drives the whole story and Magizh Thirumeni's screenplay and direction was highly lauded for the way it was driven.

Vijay's tradition of releasing movies annually continued in 2019 too and this time, his venture into sports aka football was loved by many. Inspired from several sports films and incidents, director Atlee delivered a film that catered to the fans of Vijay and otherwise.

Two years after winning a National award for 'Best Feature Film in Tamil', To Let had its much-deserved theatrical release this year. Despite the unfamiliar faces, the movie managed to live up to its government-recognized status, making it to the top list of Tamil movies in 2019.

A film that was catered to the taste of Rajinikanth's crowd, Petta was probably the first star-vehicle from Karthik Subbaraj. The movie was also among this year's highest-grossing films.

Besides thriller movies, 2019 was also a year for good debut directors and Nedunalvaadai is a product of one such. A rural drama that addressed the complexities in human relationships, the movie was one of the pleasant surprises this year.

Among the sea of uncredited 'inspirations', Vijay Antony starrer Kolaigaran was an official adaptation of a famous crime thriller. The film ended up being one of the best this year gaining laurels for director Andrew Louis.

2019 was truly a year for thrillers and Jiivi starring not-so-known faces managed to entertain the viewers with its gripping content. Also the portrayal of the lead actor did not conform to the norm, which made it even more interesting.

Amal Paul's performance in this survival thriller was one of the most talked-about this year. Director Rathna Kumar's story was billed as one of the bravest attempts in Tamil cinema's territory and was is the only other heroine-driven movie (besides Game Over), to make it to the top list this year.

Arya was seen in good form in a long time. His dual-roled crime thriller came with solid writing, terrific performances and yet another proof of director Santhakumar's mettle. Monster: Animal-love was another concept that Tamil cinema stuck to in 2019 but hardly any was as good as Monster. SJ Suryah's performance in particular as the rat-troubled man was a highlight of the film.

Just like Arya, Bharath was seen in a decently performing film after long. Another crime thriller of 2019 that came with decent writing, good acting, and an engaging narrative. Bakrid: Vikranth's accidental love for a camel-calf and the journey that it takes him in was the central theme of Bakrid, which was a heart-warming animal-love story this year.

Vikranth's accidental love for a camel-calf and the journey that it takes him in was the central theme of Bakrid, which was a heart-warming animal-love story this year.

One of the unexpected surprised this year, Vivek and his lead portrayal of a retired cop with a knack for solving crimes addressed an important topic while managing to give viewers an edge-of-the-seat story. The movie gained a lot of laurels for its completely rank new behind-the-camera team.

Animal-love was another concept that Tamil cinema stuck to in 2019 but hardly any was as good as Monster. SJ Suryah's performance in particular as the rat-troubled man was a highlight of the film.

Famed TV personality and actress Lakshmy Ramakrishnan wore the director's hat in 2019 for the survival drama i.e. House Owner. A tale of romance across ages, the film was highly praised for its realistic yet entertaining approach.

G.V. Prakash played a role, believed to be a loosely based on a 7th-century poet Nandanar who hailed from a dalit community, made musical instruments and wished to enter a place reserved 'only for brahmins'. This modern-day adaptation also came with a focus on interpersonal relationships and some strong music.

A typical commericial entertainer which catered to the taste of Ajith's audience and also appealed to others for the emotional connect it came with.

KV Anand hit it out of the park with his real-life recreations such as the locust attack ad the importance of SPG in our country. The film was also praised by the audience for being the action film it promised to be.

A political-satire that lived to its potential, LKG was the brain-child of actor RJ Balaji who also happened to play the lead. The movie introduced yet another newbie Tamil director, K.R. Prabhu.

#MCAnnualRankings: As we begin a #NewYear, here's a look back at the 'Best #Tamil Movies' of 2019 that topped the likes of both audience & critics and classes & masses!https://t.co/MHa2bCiMBD