Rajinikanth's political speech about 'Miracles' & why his fans got excited at Kamal 60! 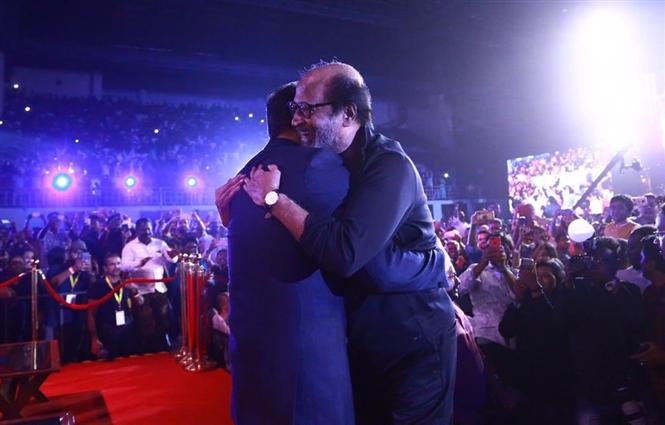 If Vadivelu's entry was a pleasant surprise for those attending Kamal 60, Rajinikanth's presence at the event was something his fans were eagerly looking forward to at the event. Ungal Naan, which celebrated 60 years of Kamal Haasan in Tamil cinema saw the 'Superstar' actor in his casual element and while talking about his bond with actor Kamal, Rajinikanth shared,

"The first time I saw Kamal Haasan was in Kalathur Kannamma when I was 10 years old..One of my classmates had difficulty reciting a poem and our teacher has cited the example of the boy who had acted in the movie and showed us the film to set an example of reciting memory..It became my life's miracle later on that I got to share my first film with him and journey with him for over 43 years in this industry..

Similarly, everyone's life is filled with rarities and miracles..Two years ago, honourable Mr. Edappadi Palaniswami wouldn't event have dreamt of becoming the Chief Minister of Tamil Nadu. But It happened. And then, they said he would last in the CM’s chair for only a few days, but he has has continued for over two years now..

So, wonders will happen.. It happened yesterday, it is happening today and it will happen tomorrow.."

Needless to say, these statements received thunderous applause from the crowd present at the event and a even more festive welcome online, for Rajinikanth fans are looking for every and any word from the actor about his political journey. Here is how they reacted after perceiving Rajinikanth's latest statement to be about his career in politics:

#Rajinikanth is the only person

What he come for the function & he Done for his Guest Role.

Superstar Rajinikanth - Two years before EPS wouldn't even have dreamt to become CM. But it happened. They said that his rule will not last for more than 20 days but athisayam nadanthathu arputham nadanthathu. Satire filled political speech.#Kamal60

#Kamal60#RajiniMakkalMandram #rajinikanth
This is suppose to be kamal function..thalaivar fans have taken over it... pic.twitter.com/uQ5G3YllCv

He #Rajinikanth was humble enoungh to call it a miracle.

Only a person who is confident of his talent , ability can praise others and call his own success a miracle.

He has the ability to be a king and a king maker.