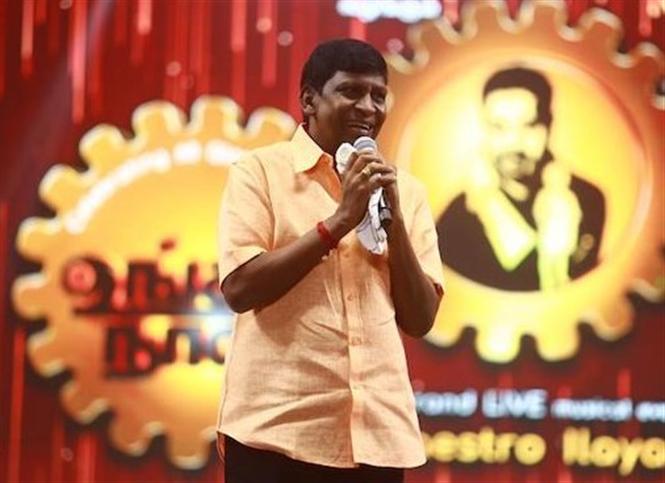 Celebrating 60 years of Kamal Haasan in the movies, an event for the Ulaganaayagan titled Ungal Naan was held at the Chennai on Sunday and among the famous names who attended the show, the most surprising guest came in the form of Vaigai Puyal Vadivelu. The comedian has been out of spotlight for quite a while now and given that the people he had issues with including director Shankar, producer T. Siva and some of TFPC's key members were present at the event, no one really expected Vadivelu to make an appearance.

However the comedian did and the 15 minutes he spent delivering his words with his trademark body language on stage had even his adversaries in splits. Sharing an anecdote from when Vadivelu and his fellow comedian tried to establish their 'acting prowess' in Thevar Magan, he said:

"The scene was Sivaji Sir's death and Sangili Murugan and I were competing on who would act-cry better before Kamal (Haasan) showed up..I guess we were howling so loud that Sivaji Sir who was lying down dead woke up mid-scene and gave us an earful.

He said 'It is Kamal who is my son in this movie, you two are behaving as though you are my long-lost twin sons'. Then he ordered us to have out mouth shut by stuffing clothing pieces..Atleast I had a towel, Sangili Murugan had to remove his veshti and stuff his mouth"

Vadivelu further added, "I remember Sivaji Sir indicating a hand gesture to P.C. Sreeram (cinematographer of Thevar Magan) and when the movie released, I realized it was to have us two over-enthusiastic actors cut-off the scene."

Vadivelu's narration which had the audience already wheezing sent them almost rolling over with laughter with this comic ending and people couldn't stop raving about the stage presence the comedian holds even to date.

This man just smashed the whole auditorium with his hilarious speech pic.twitter.com/dEKljpfFrH

RT @psairamm: That 2 minute blurry video of #vadivelu in #Kamal60 #UngalNaan put a big smile on my face. Man., I miss this guy so much. #VadiveluForLife

One of the best news that came out from #Kamal60 #UngalNaan was that #Vadivelu making a re entry with #KamalHaasan and his speech on his experience with #Sivaji was superb.. #VaigaiPuyal... we are eagerly waiting for you... 👍👍👍

Vadivelu is a true magician...Everyone knows his rift between Shankar but guess wt Shankar was enjoying his speech more than anyone and not to forget mari Selvaraj/Ranjith Enjoying it to the core as well.. 🔥 #Vadivelu #Kamal60

Moreover it was announced that Vadivelu will indeed be breaking his hiatus from films and returning with Kamal Haasan's next movie Thalaivan Irukkindraan. This double happy news has sent his fans in frenzy and they couldn't help but rejoice over the attention being showered over him.