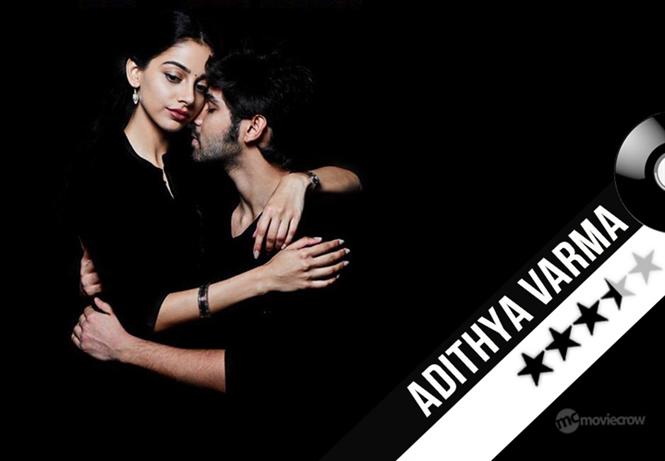 Adithya Varma is a remake of the Telugu blockbuster Arjun Reddy with Vikram's son Dhruv in the lead and directed by Gireesaaya. Radha who helmed the original, scores music for the film. One wishes that Radhan could have gone for the Original track but given the chartbuster album for the original, makers decided to retain almost all the songs from the Telugu album.

Edharkadi: ✔  Telusina Na Nuvvey comes as Edharkadi in Tamil version and the hard rock song composed by Radhan is definitely an earworm one. The punchy hook of the song, En swasam Neeye gives such an adrenaline rush which gels with the protagonist character and surprisingly Dhruv Vikram pulls off the track with his vocals.

Dhooram is the breezy song of the soundtrack with the whispery vocals, however, Telugu version by Nikhita Gandhi fares better than the Dhvani Bhanushali's shaky vocals in Tamil. The tune remains to be an easily accessible one and the guitar laden background makes this track an extremely enjoyable one.

Yaarumilla: Yaarumilla starts off brilliantly with the mandolin phrase and Sid Sriram aces the tune with his classical improvisations. Though it takes time to strike out the thoughts of phenomenal singing by Revanth in Telugu, Sid Sriram makes an impact with his earnest rendition. Composer employed Sarangi brilliantly in the second interlude to set the tone of the song.

Amudhangalaal: ✔ The soundtrack's best song is definitely Amudhangalaal and the brilliant classical fusion song where the dubstep sounds are adorned with the classical instant addictive tune. Though Thamarai's lyrics don't match with the expectations, Radhan makes up for it with his gorgeous tune where the track reaches a crescendo with the bursting veena solo intermittently.

Kanaa ✔ is another gorgeously sung track by Krithika Nelson and the waltzy backdrop is a gobsmackingly delightful one to listen. The classical sargams are undeniably the highlight of the track and the composer is in spectacular form with respect to the arrangements where Radhan throws in beautiful slide guitar and accordion solos amidst the brilliant Krithika Nelson's vocals.

Idhu Enna Maayamo is a slightly tweaked version of Emitemito and this one also follows the soft rock genre dominated by Guitar and live drums in the background. Sivakarthikeyan ably pulls off with the decent lyrics while Ranjith Govind gives a different tone when compared with the Telugu version especially because of the singer's improvisations.

Yen Ennai: The only original song of the movie Yen Ennai is trademark Sid Sriram's bluesy base track and the tune gets much better in the Charanam portions. The arrangements are dominated by the guitars and the composer employed the rousing title hook effectually and also look out for the nicely done kazoo's bits in the interludes.