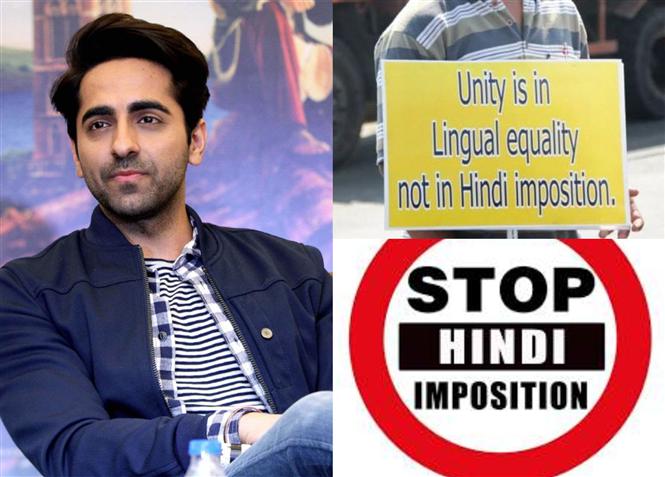 'Hindi Imposition' - Two words that rocked the nation so hard this weekend that the National Education Policy (NEP) draft uploaded in HRD Ministry's website had to be revised and re-uploaded. TL;DR a 'three language policy' was introduced by the NEP for school students in India which stated that Hindi will be a mandatory third language for kids to learn apart from English and their native language.
However, this update faced severe backlash from opposition parties and the South, with Tamil Nadu and Karnataka viewing this as 'Imposition of a language' they didn't want to learn. Both the NEP and the HRD ministry have retracted on the Hindi imposition in their 'three language formula', reiterating of an 'inadvertent error' and stating that they simply implied students learning a 'third language' (not necessarily Hindi), the choice of which would be left to the state boards now.
In lieu of the row, Bollywood actor Ayushmann Khurrana who is a self-confessed 'Hindi lover' re-shared a blog post of his from a while ago, where he had spoken about why a language shouldn't be imposed.

#Article15 is making the noise for the right reasons. My stand for equality is not only centred around #Article15Trailer. 3 years back I had written something and it holds relevance with today’s trending topic. Pls read.🇮🇳#HindiIsNotTheNationalLanguage https://t.co/8RX9zffFmT

At times when hashtags like #HindiIsNotTheNationalLanguage has to be trended to get a 'language imposition' message across, Khurrana's post from 2017 comes across as refreshingly subtle (yet valid).
Excerpts from his post:

"..How can we force Hindi on south and north-east India? They hardly speak the language...
Yes, Hindi cinema and songs have a wider reach and that’s the Wren and Martin of non-Hindi speakers, but the expectation from people residing in all parts of the country to alter their language of thought overnight would be a big mistake in a pluralistic nation like India.The priority right now is the development of our country and an over thrust should not be put on preservation of culture and heritage. It comes second. Even if you say that heritage should be preserved, as an argument, let south and north-east states preserve their culture. Let’s not force them to learn an alien language like Hindi. The non-Hindi states don’t speak the language in their homes. It’s either the native language or English. Hindi is known to them only through cinema and songs... And because of cinema, which is our country’s national art, Hindi has also gained more popularity. No wonder it’s the lingua franca.
We are a democracy and we have to give respect to each and every language and culture of our nation...As a nation, we have no option, but to be flexible. We have 23 official languages including Hindi and English. Let’s respect all and be fair.
We have a big nation. Let’s have a big heart by keeping our fragile egos at bay.."