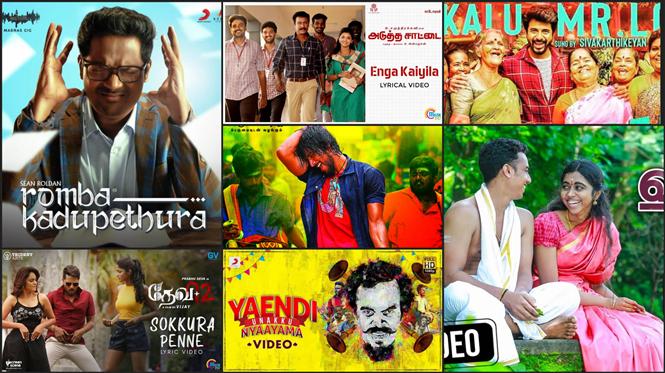 The Season 2 gets more interesting with the funky rock fusion song where Sean Roldan's amusing lyrics is an undeniable winner, especially around the title hook 'Kalakshetra Romba Kadupethura' and 'Paambu Pottu'. The arrangements are equally outlandish. with Nikhil's splendid Sax work stealing the show in the interludes.

Ghibran comes up with the sweeping lovely composition and Chinmayi's mesmerizing vocals adds further charm to the beautiful tune. Ghibran adorns the song with the soothing arrangements backed by Tabla rhythm and wonderful flute solos. Hopefully, the extended version of the song will be released with the complete soundtrack.

The second single from Mr Local is also strictly confined within the composer's limited repertoire and the song is listenable mainly because of the relatable lyrics and Sivakarthikeyan's satisfactory vocals.

Nivas K Prasanna fares better in the second track from the album and the track benefits largely from the intriguing words in the Mohanrajan's verses and the modish outlook of the arrangements, hugely backed up by Manikandan's bass guitar. Nivas K Prasanna, Vijay Antony and Alex Samuel Jenito ably prod the song with the vocals.

Sokkura Penne sounds like the equivalent of Chalmaar from Devi's first part; however the tune and the casual easy going Goan flavoured arrangements make this song a smooth ride. Shankar Mahadevan easily aces the singing part but Prabhudeva's lyrics fizzles without making any impact.

The latest single composed and sung by Anthony Daasan along with Kavitha is a boisterous listen, with the sprightly brass sections and Mohanrajan's amusing lyrics complementing well with the fun tune conceived by Anthony.

Prabhakaran replaces Imman for the sequel of the fairly successful Saattai and the first song from the movie has the shades of Joker's 'Ennanga Sir unga Sattam' in terms of rhythm, tune as well as the political lyrics by Yugabharathi. Chellankuppam Subramaniyam shines with his rustic vocals but Lady Kash's rap sounds far-fetched for the soundscape.