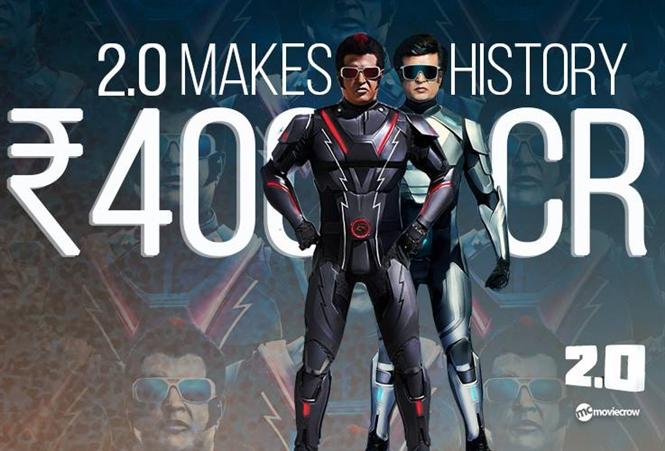 Superstar Rajinikanth's 2.0 creates history at the Box Office by becoming the first Kollywood film to gross Rs. 400 Cr worldwide in the 4 days of its opening weekend. The box office data has officially been shared by Lyca Productions on their Twitter page.

Contrary to the reports that 2.0 has been under performing in few territories including its home state of Tamil Nadu, the film has done phenomenal business in its opening weekend.

2.0 declared 'Blockbuster' in Hindi: The film has been performing exceptionally well in the North Indian belt and has done a net business of Rs. 97.25 Cr (Gross: Rs. 132 Cr). so far and it is expected to cross Rs. 100 Cr net mark today. Karan Johar, who has acquired the Hindi distribution rights of 2.0 for Rs. 80+ Cr has declared the film as a blockbuster.

As far as Tamil Nadu is concerned there is no clarity on the exact Box Office collection figures, as the film has been directly released by Lyca Productions. However, industry sources claim that the Rajinikanth, Akshay Kumar starrer has collected more than Rs. 70 Cr in its first 4 days.

The film had an excellent opening in the overseas market and early estimates suggest that the Shankar directorial has done $15 million (Rs.100+ Cr) in 4 days. 2.0 has grossed $3.69 million (Rs. 25+ Cr) from the USA market alone. It has done good business in other territories and has set new records in Australia, New Zealand and UAE circles.