Neethane En Ponvasantham (NEP) is a love story based on the moments from Varun and Nithya’s love spanning 4 phases of their life. Neethane En Ponvasantham is directed by Gautham Vasudev Menon and jointly produced by Photon Kathaas and RS Infotainment. The song tracks by Ilayaraja are already well received by public and critics.

A number of things are riding on this movie. This is an important movie for many talented people including Jiiva who is looking for a hit to stabilize his stardom. Gautham Menon's last hit was Vinnaithaandi Varuvaya, which was released almost 3 years ago. Fans are also hoping Ilayaraja's 919th movie will bring him back to working on commercial movies ever since he disassociated himself from many of the popular directors during the last decade.

As Gautham Menon himself revealed in many interviews, there is nothing new about the story. It is just about the sweet-and-sour moments in the lives of Varun (Jiiva) and Nithya (Samantha). To keep audience engaged for almost 154 minutes hinging on a bunch of simple moments is not an easy task by itself. Gautham Menon has valiantly taken up the challenge.

For these moments to sustain the viewer interest, there needs to be at least 4 key things going for it -- relateable situations, profound characterization, captivating performance and engaging dialogues. Gautham Menon probably gets the latter 2 out of these 4 things right. The dialogues are convincing in most situations. But, the situations itself may seem too ordinary. The characterizations of the lead pairs are flat, lacking insights into to why the characters behave the way they do.

Gautham Menon decides to narrate the story in a linear fashion without any gimmicks. He goes through 4 episodes of Varun and Nithya's life (childhood, high school, college and work). In all these situations, they break-up due to minor squabbles. The movie's journey is towards the destination of finding out whether Varun and Nithya will marry and live happily ever after when the final credits roll. We will not reveal whether Varun and Nithya will come together in the end since it is the journey along the way is supposed to be more important.

The screenplay moves at a slow place and intentionally at a lower gear for almost 3/4th of the movie. It is not convincing how Varun and Nithya lose touch completely without any withdrawal symptoms and able to go totally incommunicado between every single episode.

Towards the last 30 minutes, Gautham Menon takes full control over the proceedings and makes you root for the lead pairs intensely. Given Gautham Menon's track record of not letting the lead pairs live together, the viewers knows very well that the director is gutsy enough to steer the movie in whichever direction he wants without being held hostage to commercial compulsions. The last few reels grabs your attention and score high by partially erasing the shortcomings of lengthy and uneventful journey.

The movie is carried only by the strengths of 3 characters. Jiiva is as-usual natural and performs without any insecurities. His voice modulation and his chemistry with both Samantha and Santhanam are good. Samantha dubs in her own voice and shines with her many little expressions (sometimes repetitive). The ever-dependable Santhanam enlivens the proceedings whenever he shows up on screen. No doubt, Gautham Menon has extracted good performance from these 3 characters.

For a movie filled with sweet nothings, Jiiva and Samantha's conviction and hardwork is evident. Jiiva comes across as calm, composed, mature and practical. Jiiva lives by bullet-list of priorities and often makes logical decisions using his brain and by reasoning out objectively. On the other hand, Samantha is emotional and makes her decision driven by her heart. She reacts to the situations at the spur-of-the-moment, flip-flops and ends up regretting her decisions.

There are no villains in the form of parents who typically opposed the love nor scheming college friends. Except for a few friends, there are not many characters in the movie.

Ilaiyaraja has composed 8 tracks in total. Except for the opening song 'pudikale maamu', rest of the songs are broken into multiple parts fitting the situation in the movie. The background tracks are also mostly borrowed from the interludes in the songs, which work well. Cinematography is subdued and employs long wide shots for critical scenes with mixed results. The editing by Antony in the last 30 minutes is noteworthy when scenes reminiscing the past is well blended with flash-cuts.

There are no fight situations and no foreign location songs. Not much work for art director with most of the scenes shot in candid locations. There are also no big sets erected for songs. Except for the opening title song and cultural scenes, dance choreographer doesn't have much work in this movie. Gautham has given the stunt department a rain-check.

The story drags and the moments are mostly pedestrian. The movie should be crisper by cutting down by at least 20 minutes. For a movie revolving around the lead pairs, the characterization should have been more profound. Situations and scenes are sometimes repetitive. It is unclear why the director decided to shoot so many important scenes without any cuts and in wide range (e.g., interval scene). This makes you think whether the dialogues were actually written after the shots were picturized.

The dubbing choices should have been better. Samantha dubs in her own voice, which may evoke mixed reactions from viewers. Varun's father, Ravi Raghavendar's distinctively recognizable voice is not capitalized at all. His voice is overlayed by a voice artist creating some dissonance in viewer's minds. Gautham Menon himself sings a few stanzas from "Neethane en ponvasantham" song in college culturals when Varun first meets Nithya. Again, Gautham's gruff singing is a distraction and takes the focus away from the beauty of the moment.

Many may find it difficult to get immersed in most of these undramatic moments. "Mass' movie lovers will find the movie lengthy and pointless. This movie will cater for a section of audience who considers Vinnaithandi Varuvaya is an all-time classic; this small segment of audience may embrace this movie.

Gautham Menon has taken a huge gamble by releasing a soft romance story in between a heavily crowded big release season in Tamil. The box office success of this movie will depend on the success of Kumki and how aggressively the long line-up of upcoming movies will try to grab "Neethane En Ponvasantham" screens. 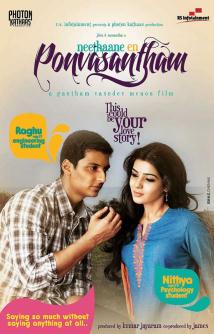