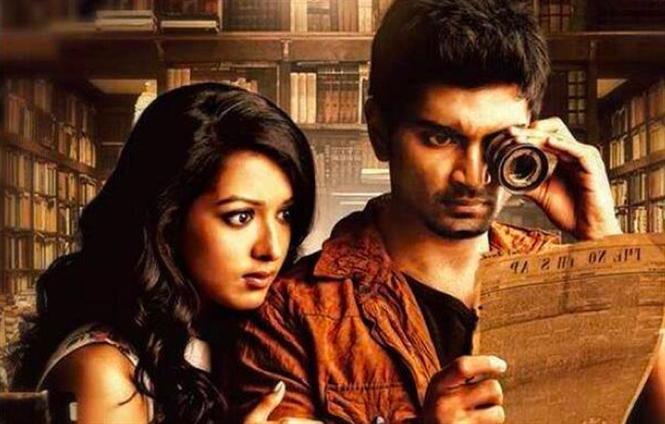 Kanithan - Brawny pretending to be Brainy

You see the trailer of Kanithan and you sort of wonder for a second. Why the title? Probably a cue that the hero solves the problems before him just like a mathematician would. So some thought has gone into naming this action thriller. So what technique does our mathematician employ to solve his problems? Read on to find.

A budding journalist gets into a quagmire thanks to a network that specializes in producing fake certificates. Need more reason for him to turn action hero?

With a physique like his more than half the work is done for Atharva to be a convincing action hero. But the attitude with which these action heroes carry themselves is what usually determines their success.success. Atharva fairly succeeds in this aspect as well. His sharp eyes mean business and he does seem competent to carry these sort of films on his gym-chiselled broad shoulders.

In Tamil commercial cinema the heroine acting stupid is the equivalent for cuteness and this tough job falls on Catherine this time.

There is a real sense of urgency in the action sequences thanks to the stunt choreographer,cameraman and editor. The BGM too works but with a sense of deja vu.

The songs are a real downer though with only Yappa Chappa being able to just pass muster. The Che Guevara number in the final chase is a real sore.

The debutant director has been very successful in one thing and that is the pace of the film. After the initial 15 minutes it does move at a breakneck speed for most of the time and this speed is what saves the film from a lot of things. First amongst these is the lack of freshness. From someother maker we might have even been tempted to call a few scenes a rip off but having been the erstwhile assistant to A.R. Murugadoss there is a certain generosity to call it an inspiration.  A contest for recollecting the scenes bearing a close similarity to Thuppakki might result in double digit answers. The sketch of the villain and these dialogues that he speaks in particular carry a very heavy hangover from the ARM-Vijay blockbuster. The thing about Thuppakki is you had two prominent scenes - The 12 member sleeper cell shootout and the sister rescue act. Most of the remaining film built up to these two scenes while Kanithan tries to have such scenes every other second.

The maker tries to pack in too many things. While his mentor dedicates a film to one section of the society Santosh does it to 3 sections in the end credits. More does not always mean merrier. Once the cat and mouse game begins you do not get a break and the hero-villain duo try outdoing each other. The past sentence might seem like an unanimous praise but it really never turns out like that on screen. Everything happens as expected. Despite having a star like Vijay and knowing very well he would never lose the fact that there was a tension was what made Thuppaki what it is.Sadly in Kanithan this never happens. If at all the villains look super stupid. Sample this scene. They have got the heroine under custody and force the hero to enter their den. He obliges and suddenly the brain cells of the villains work overtime and they come up with this brilliant idea to switch off the lights to bash the hero up. Fully armed with guns and a minimum of 20 henchmen against 1 man would any sane person even think of such an idea. Sorry!!! And in case you did not figure out what would have happened next this is probably the first commercial cinema that you are watching. You might really not mind these scenes in a lightweight masala film. But Kanithan is desperately trying to project itself as an intellectual thriller which it rarely is. There is one scene in the second half that has some spruce in it. The hero's aide tries to get confidential data masquerading himself as a ward boy. The villain runs a thorough scan on him and the hero connected wireless to his aide has all these covered. This is surely a case of each one outsmarting the other.

But such instances are few and most of the remaining film is actually all brawn while pretending to be brain. Now to the question in the first paragraph. You might recollect that in your school days you had these theorems where you had to prove LHS = RHS. If it was a two mark question you had a crisp way of answering and if the question was worth more you would tend to believe that you had to put in more ink before arriving at the expected. Kanithan does exactly that.While the hero actually ends most of the things with his fists he pretends that he does use his brain.

Sometimes a meal is so hot that you tend to gulp it down even if it is not exactly delicious. This is what saves Kanithan. It is so fast most of the times that some glaring loopholes and deja vu feel does not hurt the film as it would have had it slowed down anytime. 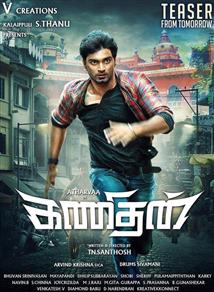