Ambuli is about the mysterious deaths of people who pass through the forest on the outskirts of a village. The reasons are unknown and villagers have varying beliefs and myths surrounding 'Ambuli'.

The directors need to be appreciated for two reasons, their attention to detail to the 60s period and the effort taken to not giving a usual masala fare. The costumes, art direction, cinematography and other technical values are good despite low budget production. There are scenes that shows that the directors are inspired by various Hollywood flicks like The Blair witch project, Jeepers Creepers and The Village (directed by Manoj Shyamalan).

The film doesn't have the right cinematic elements required to thrill the audience. The acting of the lead actors is uniformly average. Actors Parthiban and Jegan manage to stand out with their acting skills. Other seasoned actors like Uma Riyaz Khan, Thambi Ramiah and Bala Singh do not have enough opportunities to perform. The villain of this film does not provide any scope for horror.

The makers try too hard to entertain by amateurish comedy. It does seem to offer some respite. The background music is good and appeared to be inspired by music in Hollywood film Predator. The college farewell song is OK. Other songs seem to be forced into the narration. Some scientific aspects are thrown in but they do not seem to be completely convincing. The 3D effect is a bit gimmicky. The first 20 minutes and the last 30 minutes do manage to grip your attention. 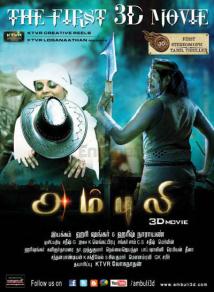