Dhoni is the third movie releasing within the last 6 months that conveys the message that people should pursue their dreams. The past two movies were Mayakkam Enna and Nanban. Not to forget the Hindi movie, Taare Zameen Par, which has the most similarities with Dhoni. Mayakkam Enna talked about pursuing the right profession. Nanban questioned the college education while Dhoni questions the education system at school level. This is releasing when countries like the US and many European countries have started looking towards India to take some notes for improving their own education systems.

Dhoni is such a well-intentioned movie that reviewers and people will feel guilty about even criticizing such a movie. Some of the the noteworthy aspects of the movie is that it is loyal to the story-line and doesn't deviate much to accommodate cinematic elements.

Ilayaraja's background music helps the story to move along smoothly. "Thaavi Thaavi" is the pick of the lot and its use in the climax ensures that people mutter this song on the way out of the theatres. This song stands apart in the otherwise average album.

National award performer Prakash Raj carries the movie single-handedly. He has brought the plight of a middle-class single father so true to life. Only negative point is that a few people in the theatre started talking about how good his acting during the middle of a highly emotional scene... This makes you wonder whether shouldn't great cinema really keeps you glued to the screen and forget about the mechanics of movie-making.

Another memorable performer in this movie is Radhika Apte. She is naturally expressive and holds your attention with her terrific screen presence. Thalai Vaasal Vijay and Nasser make minimal impact. Rest of the actors are just functional. Comedy scenes involving the office colleague who uses Prakash Raj's cell phone to talk to his illicit partner(s) is annoying. Those scenes should have been pruned or totally eliminated. It is a surprise to see why Brahmanandam was not given enough scope. Prabhu Deva's cameo appearance in a song sprinkles some commercial touch to the movie.

Due to the fact that Prakash Raj emphasize so much on developing his own characterization that it starts working against the movie after a point. You feel more empathy for Prakash Raj's character and feel sorry for all the struggle he had to go through as a widowed father. In fact there is no reason to blame him since he was very supportive by sending his kid for Cricket coaching lessons, buying new cricket shoes, etc. As a father, all he asks is to take a break from Cricket for sometime so that he doesn't become a school drop-out in 9th standard. It is clear that Prakash Raj doesn't force his son to become a class topper or get 100%. This should seem very logical and reasonable to any viewer. Prakash Raj's character is more than well etched out.

The main problem is with the other characterizations which are not consistent, especially the central character of the boy who aspires to become a Dhoni. It is not clear whether the kid has learning disability or pre-occupied by Cricket or just too lazy to even study. In one scene, he was shown bullying his classmate, another scene the principal complains about the kid making fun of his teachers. To contradict, the school peon says the kid is very respectful and caring. There are way too many mixed signals around the kid's characterization with whom we are supposed to identify with. This is precisely where the movie falters. This is what happens to a Director who is also the Hero of a movie. A syndrome that even a legend like Kamal Haasan has been struggling with whenever he acts under his own (ghost) direction.

Another issue is that many scenes and dialogues were predictable and repetitive (e.g., scene where Radhika Apte justifies why she took up the oldest profession, numerous middle-class mentality scenes and even minor mannerisms like Kandhuvatti Ghani raising hand as if to hit, cell phone ring-tone, etc.). On the technical front, it is difficult to ignore the low-budget TV drama feel in many places. Neeya Naana scenes and flat lighting further adds to the drama feel of the movie.

Director Prakash Raj started Dhoni in September 2011 and released it just within 5 months. It gives you a feeling that Prakash Raj went for the shoot as soon as the basic plot and story was formed. Due to the lack of the final embellishment, the movie strictly stays between average and above-average levels throughout the movie without strong high moments. On the personal guilt side, it may also make you question whether we are too spoilt by all the heavy dose of sugar coating (Shankar's style commercialization) that we revolt when we see a simple and straightforward movie taken straight from the heart. 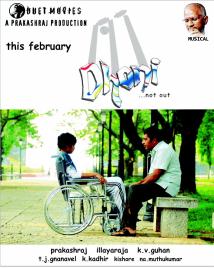