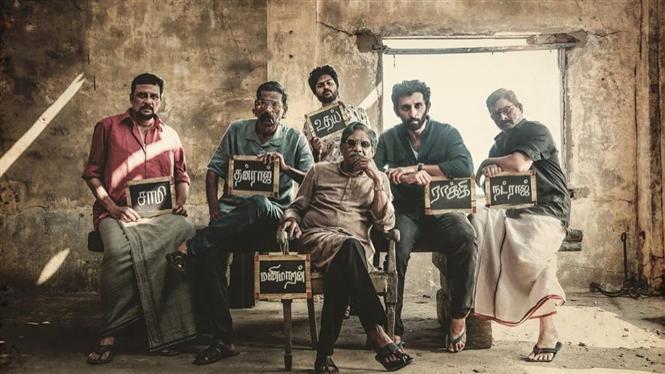 Rocky is from the beginning promoted as an intense action flick, directed by debutante Arun Madheswaran. The young filmmaker has already completed his second directorial ‘Saani Kaayidham’ and is said he has signed his third too, even before the release of his first feature film, mainly because of the expectations set by the raw and gritty trailer of Rocky which hit the internet a couple of years back. The movie features Taramani fame actor Vasanth Ravi in the lead role. Legendary director turned actor Bharathiraja also plays an important part of the cast.

Vasanth Ravi comes out from jail after imprisoned for 17 years for committing a murder. He tries to stay away from his past, hiding from the crime world and from the gang in which he was a part of, and tries to find his younger sister. But the revenge from the dark-past haunts the hopeful-present and turns things upside down for the hero. Surrounded by vengeful men, what happens in his life and to his dear people forms the remaining story.

Debut director Arun Madheswaran is undoubtedly skilled, when it comes to modern-day nuanced filmmaking. There are some refreshing stretches in the narration, the youngster attempts to present certain edges of the story very interestingly by completely taking us for a trip outside this film’s world. Not just that, there are some highly captivating framing senses for this man. The non-linear screenplay pattern would’ve worked better if there was enough goods to serve during the reveal. The base is strong, very sensitive and a powerful one if we look at it closely, but the topic and the setting is viewed just from the plain eye instead of placing a microscope in front, and unfortunately because of missing out on depth by a mile, it feels there’s no story at all here. Also, we get to know only a very little about the lives of the characters for a very long time into the film, and thus it was hard to attach with flow and watch. Offers limited engagement for the most part, literally nothing happens in the initial 45 minutes, there’s no progression at all or it’s actually that sluggish as we don’t feel it moving until the story lands in his turning point. Then there’s a bang-on interval block that is filled with an excitingly powerful action sequence. The raw and ruthless treatment with blood-sheds adds value as this content demands such an exhibition of gore. But at the end of the day, all that matters is how gripping the film is, in that case this one’s a bummer despite having the potential. Writing is the major spoilsport, unlike the direction the paperwork has gotten a lot of clichés. The film tries its best to sell an old wine in a new bottle and that doesn’t work here, despite the core plot being so unique, the characters and the drama between them are so usual. Certain clichés are purposefully avoided concerning the explanation of the backstories and flashbacks, but what exists is nothing other than what we’ve seen in a bunch of movies, the whole revenge angle for that matter. It is even more disappointing as the film travels on the particular vengeance idea, so why not just clearly exhibit what has happened in their lives earlier. And, the fact that the hero has been in jail and has come out after 17 long years is unbelievable, in the meaning that his facial look doesn’t signify that he’s around that age. Main reason for the conflict to end up tasteless and the emotions to fall without providing the impact is because we’re not aware of the important details till the final act. The climax is the soul of the film and the actual plot depends on the striking factor that’s present in this scene, but unfortunately a famous big hero flick had the same blasting twist at the end, if not for that, this particular portion could have been a lot more enjoyable than it is.

Vasanth Ravi is tailor-made for the role he has played. Be it the rough and tough gangster side or the zoned-out man who has just come out of prison and he has no friends/ family to express, he has outperformed himself from his first and previous venture ‘Taramani’. Raveena Ravi plays the central character that helps the story to take-off, but she couldn’t offer much with the very less screen-space that she has got. Same with Rohini as well, thankfully she spills a dialogue in a particular slang that tells us in which part of India the film actually takes place, but otherwise her presence is disappointing. And, the voice of Daniel Balaji plays the hero’s dad. Yes, we don’t get to see him even in a single frame. Bharathiraja gets a meaty role and delivers a power-packed performance, the scene where he emotes and cries on seeing a brutal murder in front of his eyes but couldn’t do anything about it, he provides his fullest to express things perfectly. The other new faces who are part of the gang are ideal casting choices and fit very well.

Technicality is the biggest strength of the movie. Out and out, all departments have worked splendidly throughout. The camera work is so artistic and the visuals tell us better stories than the writing. The frame arrangements, artist placements are like a poem. The dark toned shots hinting us the gore that’s gonna follow are amazing. The break-point fight sequence and the climax shoot-out portion will stand tall and make into the list of stunningly-shot action stretches in Tamil cinema. Also, a handful of places have attempted to be single-shots and it results in the film’s momentum. Editing is fine too, transitions are seamless but however there are plenty of places that deserves to be scissored for a better hold of a scene, especially in the first hour. Darbuka Siva has done a fabulous job not just by giving an aptly effective score but also by giving space for the sound effects department to take over at all the necessary places. Kudos to the SFX team, there is so much detailing and clarity with respect to the sounds. Stunt choreography is strong, more than the brutality, loved the pre-interval fight scene, the whole sequence was done like an admirable painting.

This movie is probably the best example to realize good filmmaking cannot make a good film. Story and screenplay are ultimately the more important aspects than technicalities and stylish presentation, and that’s lacking here.

ROCKY - Technically sound and that's it!