Netrikann Review - Nayanthara shines as a star in a film that starts as a thriller and settles into a pop corn entertainer! 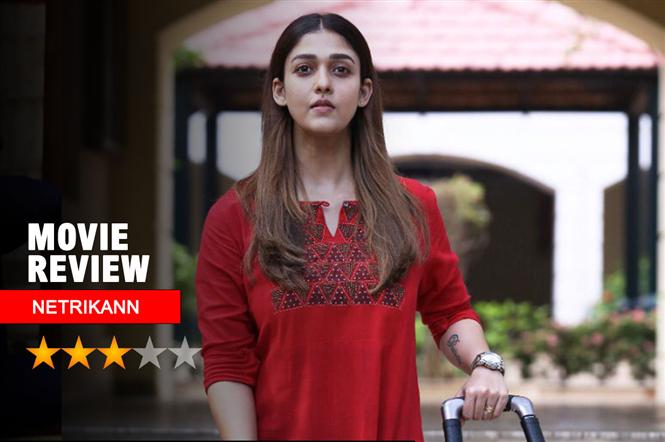 Netrikann - Nayanthara shines as a star in a film that starts as a thriller and settles into a pop corn entertainer!

The trailer of Netrikann made an impression that this might not fit into what you might call the sensibilities of the typical mainstream audience. It was violent. The film is the next venture of the director who made Aval. It is the remake of the Korean thriller Blind(2011). I was curious about how family friendly Netrikann might actually turn out to be. Because, despite the violent trailer, this is a film that stars 'Nayanthara'.

I haven't seen the Korean original but a look up shows that it had a runtime of around 110 minutes. Netrikann clocks around 145 minutes. So there has definitely been tweaks or could you say that the film has been 'stretched', because that is how the last leg of the film feels like. Netrikann is about an ex CBI officer who is trying to recover from a tragic incident that resulted in her not only losing her vision. She crosses the path of a maniac and from thereon it is a cat and mouse game between the two.

In some ways, Netrikann is your typical star vehicle minus the romance. But having a female star headlining the proceedings makes all the difference here. Nayanthara shines as a STAR. She isn't mouthing punch dialogues at the drop of the hat but she has that star presence about her. And this isn't a star vehicle where the protagonist is having it easy. In fact she loses a lot during the battle. The performance too is very good. Watch out for the scene where she cries inconsolably after having lost another form of her vision. It is a nice little touch to have her pet named as 'Kanna'.

Netrikann definitely works for the most part. But in what way is the question. It starts off like a dark thriller and does seem so upto a point. But then despite the fact that the antagonist keeps getting the upper hand, the tension sort of does fizzle away and the film now works more like a popcorn entertainer. It is not as though we have some mindless action or some song and dance routine but the danger that seemed real till one point becomes way too filmy now. The villain doesn't seem as menacing as we thought him to be and Ajmal plays the character exactly like that. We sense more danger when he is not on screen. And he has it too easy in the film. He keeps chasing someone inside a mall with no fear about his identity being revealed and then we do not have any CCTVs inside the mall that should have captured him. Instead, the police have to rely on a sketch artist. The final leg of the film also feels stretched with characters getting beaten badly and then waking up with full strength and being violent again. Manikandan shines in a nice role. So this is where I am a bit confused. Remove the likes of Manikandan and the sentimental aspects of the film and maybe this could have been a more taut thriller. These elements make the film 'less dark or less intense'. But again, some of these portions are also the better parts of the film. So they sort of even out at the end. But a supposedly dangerous villain employs someone as his agent to do the dirty business and this character is made to be foolish just for laughs. How do you fear the villain anymore?

Netrikann is a pretty decent star vehicle. It may not work entirely as a thriller but it certainly does the job as a popcorn entertainer.