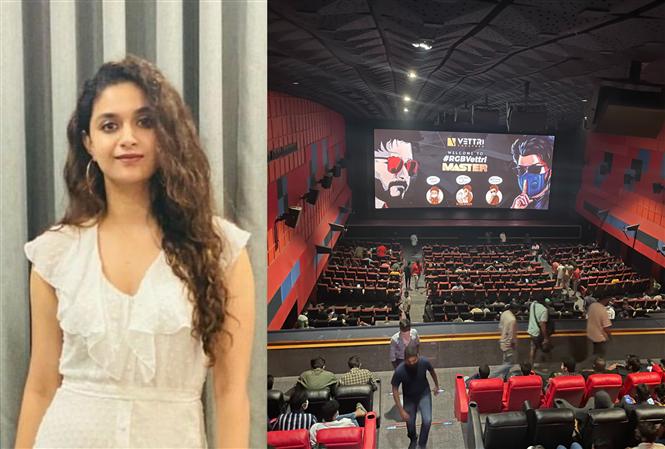 Actress Keerthy Suresh took to twitter recently to let the world know that she was catching a screening of Vijay's latest release Master at a popular elite theater screen at Chennai. No sooner than she poster of the cinema hall she was seated in, her Twitter mentions were flooded with questions on seating arrangements in the said theater and why there seemed to be no COVID-19 safety precautions in place.

Some even assumed the theater allowed a 100% seating capacity against government's orders and were worried the audience did not socially distance themselves enough for the Coronavirus pandemic. Here are some of their reactions.

Looks like 💯 % occupancy, as v expected not sure why are they playing with the fans health
Now fans will come and comment go and ask the same question 2 political gathering, point is simple it's a mistake wherever it happens@VettriTheatres enna bro, neengaluma, kaasugaga ipdiya

@chennaicorp look at this! They have not even followed the norms! It’s feels like covid doesn’t exist for these ppl. Bec of them ppl who are trying to be safe are also affected. Pls take action! @ndtvindia @PTTVOnlineNews @Tv_thanthi @CMOTamilNadu

Hey sorry. Just saw the picture. Looks like you watched the film from the box isolated from the crowd. Kudos to you. I know we're all scared of crowd now.

@CMOTamilNadu @EPSTamilNadu CM sir where is social distancing seema like 100% occupancy In like Vijay sir movie, but people lives matter above all. Please request you to order for 50% occupancy. Pandemic is not over yet.

Be careful, take precautions. I saw that people are least bothered to even wear masks at your place.... njoi...

Does not look like the 50% occupancy is being followed. Highly disappointing!

It is worth mentioning here that non-compliance of social distancing protocols and SOPs were spotted at several other movie theaters as well. Twitter is flooded with pictures of crowds from Master screening, with the netizens divided between revelling and complaining at them.