Enola Holmes Review - An enjoyable fun ride with a terrific Millie Bobby Brown at the centre! 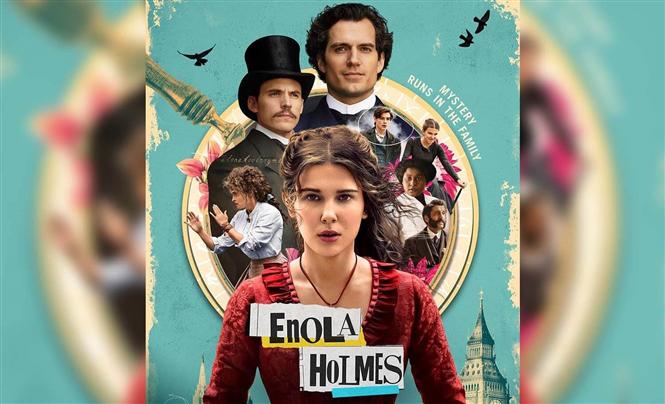 Enola Holmes - An enjoyable fun ride with a terrific Millie Bobby Brown at the centre!

Enola Holmes might be the sister of the more famous Sherlock, but this film is less about solving mysteries and more about introducing a personality to us. It works as the origin story (if it indeed develops as a franchise) of Enola Holmes and also as a coming of age story of a feisty teenager. The latter is the exciting aspect of this film, as it also has a lot to say about feminism but keeps it simple and effective. The best of all - it is extremely entertaining!

Enola Holmes doubles up as the narrator and literally breaks the fourth wall, as the character interacts directly with us at various points in the film. As a technique, this has the risk of coming across as lazy, but with an exuberant Millie Bobby Brown at the forefront, this works like a charm for the film. Millie owns the film and makes Enola extremely endearing. It isn't easy to sell over the top antics successfully and that is why this performance is so special. Within the first few minutes, the actress makes the character likable and we are in sync with the tone of the film. And for those of us who were expecting a thrill ride about solving mysteries, the film sets up everything right in the very beginning, to let us know exactly on the kind of film we have turned up for (Okay, by logging into Netflix in this case).

The plot is very simple and is essentially about Enola getting to face the world on her own. Till the age of 16, she is brought up by her mother who keeps her far removed from the outside world and even refrains from giving her a formal education. She teaches Enola everything, all by herself. What looks like a plot point at first, actually becomes the underlying theme of the film. This becomes apparent during the later part when Enola is forced to undergo formal education for a brief while. These scenes showcase how educational institutions serve as the breeding ground for grooming young girls to eventually become 'good' wives and mothers. Enola happens to be a feminist not because she was taught to be one but because she wasn't taught to be otherwise! These ideas about feminism are sprinkled throughout the film amidst Enola's adventures. Be it about refusing to accept society's expectations of a girl or about saying things loud enough so that you can be heard or the recurring idea about how the future is ours or even the criticism on those who might be genuinely good persons (probably men in this case) but do not try to change the world because it suits them the way it is - the film keeps reminding us about what it stands for.

To be honest, Enola Holmes feels more like a mini superhero(ine) film and less a story about a detective. The mystery and the decoding of it is kept rather basic and this also makes sense given that the protagonist is a teenager. The self awareness of the makers is what makes the film what it is. The film keeps it simple, doesn't try to pack in a lot but at the same time, the scale remains adequately big and the richness in visuals and an enchanting musical score ensure that we remain amused. Though the film is about Enola and Sherlock's part is more a cameo, Henry Cavil comes across a bit too stiff and serious. This becomes more conspicuous as we have seen Sherlock being played with a lot of flavour by other actors in his 'own' films.

An endearing titular character played by a terrific Millie Bobby Brown and a light hearted narrative ensure that Enola Holmes is a fun ride. What more, it also doubles up as a 'Feminist Guide for Dummies' !