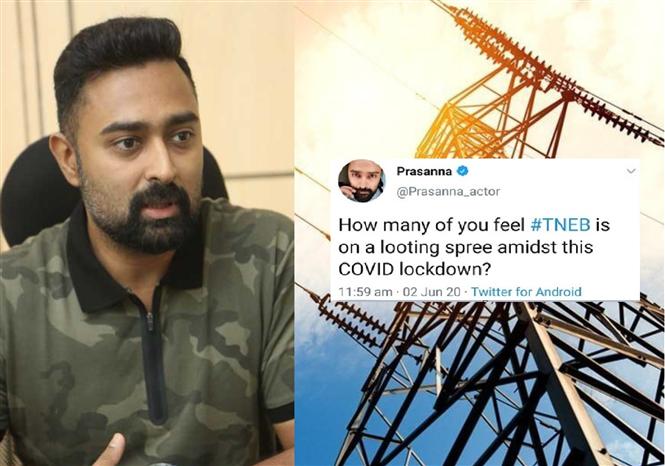 Recently a tweet of actor Prasanna's questioning the Tamil Nadu Electricity Board (TNEB) went viral, encouraging a flurry of similar complaints alleging that they have seen an increase in the electricity bills ever since lockdown started in the state. While a section of internet users already pointed out that TNEB has not changed their way of calculating the charges, an official statement from the government-run board now reads,

"The accusation that electricity bill that is surveyed every 2 months only reduces the charge for the previous month but not the units (consumed) is incorrect. We condemn actor Prasanna's criticism of the system with heavy words.

Calculation is done once every 2 months, in the conventional survey method; If you have any doubts in the calculation, you can contact the Electricity board Office! The method of calculation is revealed on the website https://www.tangedco.gov.in/"

Since actor Prasanna had also gone on news channels explaining why he felt the Electricity board calculations were not fair, an example of the points made from his side and the counter side can be seen here:

I don't think TNEB is looting. This is how they have calculated the bill amount, and it is fair. pic.twitter.com/6ug3Zj8fsC

If the total consumption is say1000 units since the reading was taken in Feb, it is divided across two billing periods with 500 units each for billing calculations.
You can call it a loot if the entire 1000 units are considered for just one billing period which is not the case.

I would ask you to analyse your detailed bill at https://t.co/JiFQwVUtZh. Not sure how they have calculated it in your case.
By the way, 1000 units will be Rs. 5030 and not Rs. 6600 considering the slab rates.