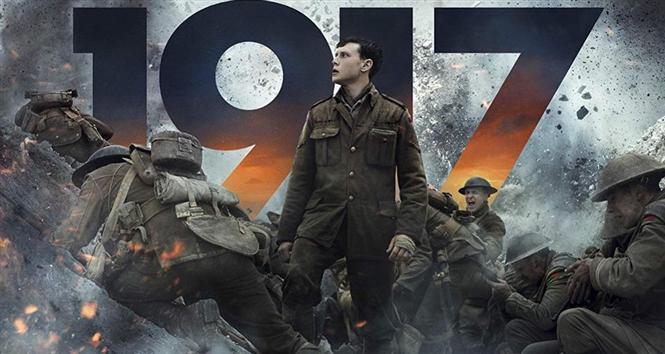 An unmatchable genius piece of art !

Director Sam Mendes’ Golden Globe winning, Oscar nominated war based film ‘1917’ has hit screens worldwide. Starring George Mackay and Dean-Charles Chapman in pivotal roles, this picture is realism at its peak clubbed with the best of efforts from all the various departments of filmmaking. Why is 1917 such a special film for fans?

The film 1917’s plot dwells on a single motive, that has two purposes right through the 2 hour duration of the film. To put it in simple words, Will Schofield (George Mackay) and Tom Blake (Dean-Charles), two young British soldiers are assigned an order from General Erinmore in order to stop the attack on the German forces that have incidentally decided to pull back. They have to convey this message to the Devons (British army) and the entire film tracks their travel from the British camp, across no man’s land and into the German encroachment and finally onto the battlefield, where the first wave of attack is about to happen at dawn.

There is another subplot which deals with Tom Blake’s elder brother, who is part of the Devons and all set to participate in the first wave of war against the Germans. Do Tom Blake and Schofield reach Blake’s brother? What happens if only one of them has to trod on for a majority of this realistic and dangerous journey? These are the points touched upon in the latter half of the film that deals with survival, method acting, numerous single shots that may have been cut only when there is darkness and so on.

On paper, though the plot does not seem like rocket science, the shooting process of 1917 by director Sam Mendes is like none other. The number of single shots is astonishingly high and the chemistry between the cinematographer, director and actor requires to be at the best levels that have never been explored before. 1917 is a brilliant piece of art put together grain by grain and hence the product seems so prolific.

Some mention-worthy scenes amidst this beautifully crafted picture include, the falling off of the roof onto Schofield and how Blake helps him out, the copter crash sequence and the extremely well-shot climax scene, that has Schofield running crisscross amidst bomb blasts in order to desperately deliver the message to the Colonel Mackenzie. It is hard to state that only these particular scenes were brilliant in conveying what they set out to, as the emotional quotient works out in every sequence that touches upon the friendship between Blake and Schofield. Another stand out point is the conversation between Schofield and Blake’s brother and these will leave you in tears.

Technically, it is safe to say that 1917 is the best experiment, that proves to have gone right in every department possible. Cinematographer Roger Deakins deserves a lot of awards that he may bag very soon as the entire film is shot in the handheld format with barely any cuts. Music by Thomas Newman is on another level and Sam Mendes the director, deserves due credit for extracting the best out of his technicians and actors in order to provide a unique, ‘hard to beat’ sort of film watching experience.

On the whole, 1917 is that film which you may not want to miss and which you may get only once in a decade. It is no joke to shoot a war film based on the WW1 and do it in such a justifying manner. The best part is that it does not seem like a docu-drama at any point and full credits to the entire team for providing this intense experience that will stay in our hearts for years to come! Go for it with no inhibitions and get enthralled!

Bottomline: An unmatchable genius piece of art in the form of 1917! Do not miss! Director Sam Mendes and actor George Mackay head this complete 'winner' of a film! Book your tickets to witness shear brilliance!