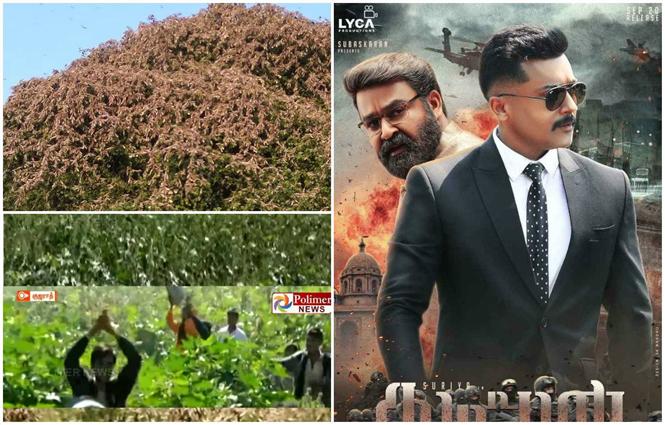 New born locusts have wreaked havoc in the fields of Gujarat in one of the deadliest hopper attack since 1994 in India. This massive locust invasion has affected parts of North Gujarat such as Banaskantha (worst-affected), Patan and Kutch who also happen to share borders with the neighbouring country of Pakistan.

Incidentally, this farms-threatening incident has reminded a lot of people of Suriya's last release Kaappaan, where director K.V. Anand had included a similar scene of farms-under-siege by these migratory insects.

The Gujarat Agriculture Minister RC Faldu confirmed the impact of the attack on Tuesday and said, “The insect has come from Oman side and due to wind directions it got diverted to North Gujarat. We have initiated the spraying of the insecticides to help the farmers. About 87 villages in Banaskantha have been hit due to this locust attack. We are taking all precautionary measures in the adjoining regions to stop its spread,”

Though the Locust Circle Office (LCO) run by ministry of agriculture and farmers Welfare at Palanpur expressed 'surprise' at the pattern change, local experts state that the State administration ignored an alert from the UN Food and Agriculture Organisation (FAO) of a massive locust attack in South Asia covering Pakistan and India. And now they feel that the government’s efforts to 'survery and tackle' the situation is too late.