Gantumoote Review - This stunning slice of life take on teenage romance is a gem to behold! 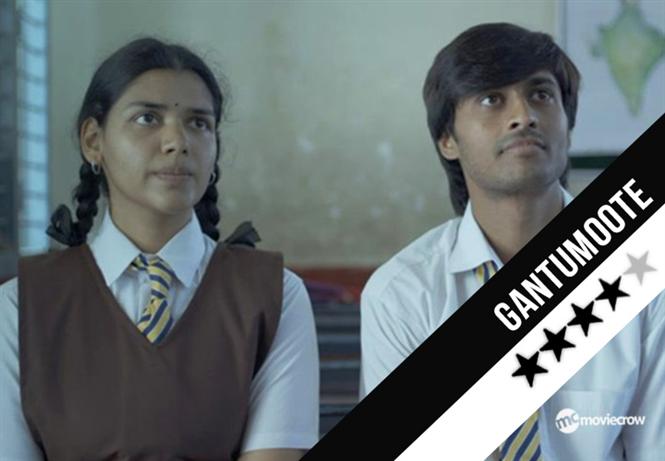 Gantumoote - This stunning slice of life take on teenage romance is a gem to behold!

There are films and then there are films. By the latter category I mean films that suck you right into the screen, within the vicinity of the characters and have you interact with them emotionally. Such is the impact that these characters could possibly be ingrained forever in your memory. The demarcation between reel and real is blurred or almost absent. Roopa Rao's Gantumoote is one such experience that stirs in you a gamut of emotions.

A group of friends are about to start off on a trip but one of their friend 'Meera' hasn't turned up. From their conversation we understand that this isn't the first time that she hasn't shown up. So who is Meera? Is she reclusive? If so, what made her this way? While the friends go on with their trip, we are introduced to Meera who takes us on a different trip - this one is down her memory lane. And what a fascinating journey it turns out to be!

Gantumoote is one of those rare films that looks at love solely from the girl's point of view. The entire narration is through Meera and how refreshing it is to see all those little differences when we have romance shown through the female gaze. And what we see or rather experience is absolute bliss. I can't recollect immediately any other film where the romance felt so real with all the innocence, absurdities, sweet nothings , intimacy, confusions and complexities. There is an arc to the relationship. The initial spark is through physical attraction but it isn't love at first sight as well. Madhu has been in the same classroom as Meera but she sees him in a totally different light after watching Hum Aapke Hain Koun. Again, this doesn't seem odd or out of the blue as we are by then familiar with Meera's relationship with movie halls and how movies are her closest companions. There is a gradual nicety to how the attraction builds between Meera and Madhu before they get into the 'cannot be without you' zone.

Teja Belawadi as Meera comes up with a portrayal that is bound to stay with you for ages. There is hardly a false note in her performance and everytime her eyes widen up on seeing Madhu, you almost feel the flutter in her stomach. Meera's voice over keeps telling us about what she is going through at various instances of the film but even if you remove the audio, Teja Belawadi's expressiveness would probably convey these emotions in a pitch perfect manner. Nischith as Madhu is also terrific.The character transitions from a carefree teenager to someone who becomes helpless and starts doubting his self worth. They dynamics of the relationship between Meera and Madhu is enthralling to say the least. Whenever they get intimate there is a clear indication of consent. Madhu even says sorry when he makes her uncomfortable at a point. The physical attraction too is depicted entirely through Meera's gaze. This is a film that respects its characters and situations. When Meera and Madhu meet after a 2 month break they just don't glue immediately. You sense their hesitation and the film shows us these uncomfortable few minutes before they get into an embrace.

Gantumoote is that type of film that does make a social commentary on pertinent issues but these are always an integral part of the narrative and the characters on screen. A guy slut shaming a girl who has rejected his proposal and the biology teacher skipping the chapter on reproduction and Meera having to rely on porn to fill the gaps are two scenes that I recollect at this point. This isn't a message movie but it keeps asking you all the right questions and holds a mirror on the kind of society that we are a part of. There is also this depiction of an ideal teacher who sees what Meera and Madhu are upto and understands that this is completely natural and is absolutely fine with it. But given their age and the crucial juncture that they are at, he puts across his caring advice in the sweetest of manners.

Roopa Rao's film kindles nostalgic memories to those who had their schooling in the 90s. The classroom ambience, the class topper being given the task to evaluate test papers, the delicateness involved in using the landline phone of your neighbourhood uncle and on and on. This is a film that is all heart. Meera keeps scribbling Madhu's name in her textbooks and later during an exam when she tries to recollect an answer, the images of the pages from the book flashes inside her and it includes those scribblings! These aren't scenes that you can write or execute without having experienced them.

Meera's words before the end credits roll goes as follows, "I feel so FULL and EMPTY all the time". And this is how you feel at the end of the film as well, having virtually been Meera for close to 2 hours. This is a film that fills you with so much emotions as well as draws out a lot through smiles and tears!

Bottomline: Cheerful and poignant in equal measure, Gantumoote is that rare gem that you ought not to miss!