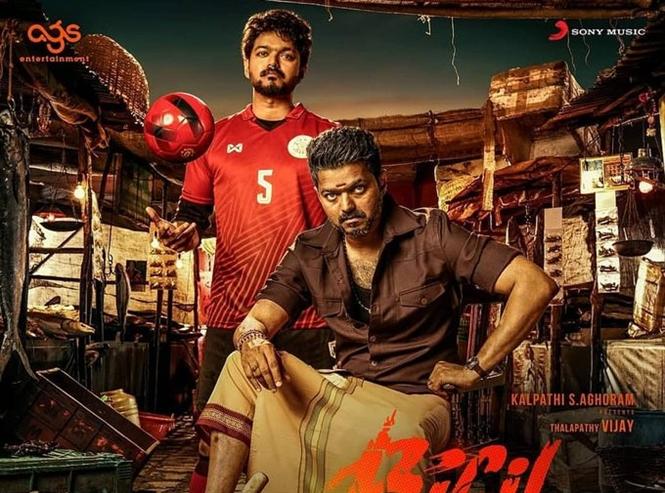 The album opens with "Singappenney".. a song that starts with a ecstatic call of A.R.Rahman himself and get into a groovy loop of chorus. Vivek's lyrics are endearing about motivating the team women that the lead character nourishes in the film. And, like most of ARR's recent tracks, it is tough to get into the catchy tune that can be hummed or identified as song. The number is more of structureless and blends its different portions through beats, melody hooks, whistle calls and chorus chants. The charanam where ARR kicks in with a new energy is refreshing. However, my favourite part of the song is when Shashaa Tirupati mellifluously enters in. The entire portion is vintage Rahman blazing out.

Without a doubt, "Verithanam" is the most commercially accessible track of the album. Vijay's vocals bottle up a truck load of celebration and enthu into the folk number. Vivek has been getting too much flakes for his unapologetic use of North Madras words in order to pen down a North Madras song. Pullingo, Dhaawlath, Inaa, Olaathanum.. All these come up just as mere meter fillers than organically evolving into the flow of the song. The interludes that linger around a female vocal doing an aalap with the word 'Surangani' and a kid commenting to it is cutesy with it diving into an even more energetic charanam. The track closures itself in a peppy focal fest of cheers.

"Unakaaga", a duet track rendered by Sreekanth and Madhura is an out and out melody. The number highly reminds one of Innum Konjam Neram Enna and Moongil Thottam. Madhura comes as a winner in her effortless rendition of the lyrics. As she sings "Nilaa.. Mazha.. Mozhi.. Ala.. Pani.. Irul.. Kili.. Kela..", the number, quietly, for that very serene moment, turns as beautiful as it can get. The final Veena postlude wraps the song gently.

"Maathare", the only number in the album where the stamp ARR falls tampant and rigidly. Chinmayi's rendition truly gets out of the world. And it is a happy irony that she has been taken back to render a track by Rahman amidst all the chaos she has to face in a track that talks about harassments against women. I don't quite get "Maarbagam pola endhan manadhukku oru uruvam.. Irundhirundhaal dhaanaa aaninam paarthidum adhaiyum?" written by Vivek countering against one and all in men. The orchestration beneath the track is truly international. A number that is nothing short of what you expect out of an icon that Rahman is!

"Bigulu Bigulu ma".. a theme track with folky beats and drumrolls and a loop of words 'Bigulu Bigulu Bigulu ma..' is a fun track that also makes you wonder, 'Did ARR really decided to put this as a fifth track in the album?'. Earlier, this would have been just a background theme. But, as a full-on track, it is quite hard to decode what it offers to the collective mood of the soundtrack or the film.

Bottomline : A.R.Rahman's third successive collaboration with Vijay and fifth over the years is an amusing mix. Between an elastic spectrum of staying true to the likes of ARR and satisfying the monstrous hungry of the fans of a huge stardom, the album is more of a mixbag balancing both. Sometimes ARR overtakes and sometimes he gets ruthlessly overtaken.