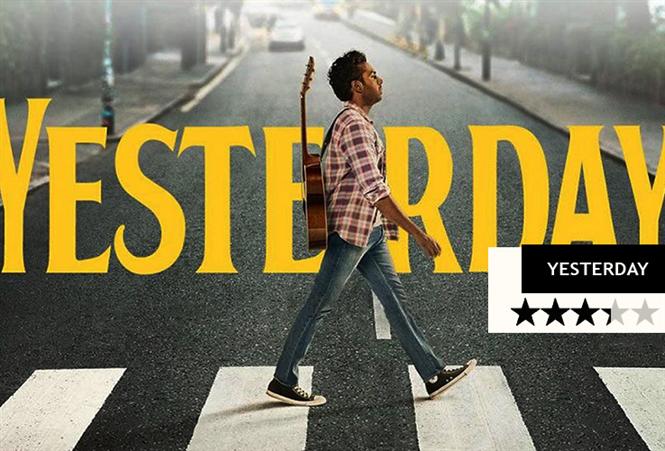 A well etched out music driven fantasy film from Danny Boyle and team, with a lot of cheer for The Beatles!

Highly acclaimed director Danny Boyle of Slumdog Millionaire fame comes up with the musical drama based fantasy film Yesterday, starring Himesh Patel in the lead role as Jack Malik. A fan of The Beatles? Want to know what happens if they disappear from this world and none of their music compositions ever existed? Don’t fret yet, the film Yesterday deals with such a subject and what an aspiring artist does when he realises the whole world excluding him never knew of the legendary Beatles. What does Yesterday have for its audiences? Read further to find out.

Jack Malik is a young aspiring musician who struggles to make a mark and hardly has anyone around him who believe in his potential. Ellie played by Lily James is his love interest and she is probably the only person who thinks he has it in him. After a sudden blackout, The Beatles become non-existent and nobody except Jack has ever heard of them or their songs. Troubled to understand his situation at first but trying to capitalise on the same, Jack sets out to show the world the music that the legendary Beatles made. He gets Ed Sheeran’s help at the beginning as he is spotted at a gig where he comes across as totally impressive. What does he do with all the sudden fame, money, attention and all of the Beatles’ music forms the rest of the plot of this musical adventure film.

Danny Boyle must be given complete credits to his casting equation work. Be it Dev Patel in Slumdog or the young Himesh in Yesterday, he gets it right with his leads. However, there is very little that goes wrong with the casting of other characters as there is an extended cameo by Ed Sheeran himself and a surprise cast in the latter half. Lily acts well as Ellie and Kate Mckinnon as Ed Sheeran’s manager performs to perfection. Even the smaller roles like Jack’s parents are impressive and funny adding value to the humour quotient. But it is Jack who has to shoulder the film and it is easy to say he sings and performs in an exquisite fashion.

Yesterday the film has a very interesting narrative. Almost all of the scenes begin like chapters of a book with the locations coming out in letters to notify where we head next. Although there is a major logic loophole with respect to the blackout, it can be stated as a fantasy element that does not require too much digging into. Barring few minor inconsistencies, the film does engage you whether you are here for the music or as a layman to witness a standalone film. Some of the famous songs like Let It Be and Yesterday are performed by Jack Malik and they would definitely keep the fans abliss. The ending though might not be the best for the majority as the sudden transformation of the title character that you would witness seemed a little unwanted and forced. In fact, the film’s pre-climax might have served as a better climax block and the last few minutes actually happen to be the pineapple on the otherwise cheesy Pizza.

Technically, the edit of ‘Yesterday’, especially in the church sequences are commendable and go hand in hand with the music. In fact, the shot selections in certain scenes are also highly intense and kudos to the cinematographer Christopher Ross. Music by Daniel is impressive and does not spoil anything for the fans of The Beatles. Some of the mention worthy scenes include the piano session featuring Jack and his parents for the first time, the numerous concert scenes where the lead performs including the pre-climax at the famous Pier of Los Angeles, the entry of Ed Sheeran and all his scenes with Jack, their face off and a surprise twist with a superb reveal towards the fag end. If only Danny Boyle decided to finish things off a tad bit quicker and had done away with the last part, Yesterday would have been ecstasy.

On the whole, Yesterday has some really good positives that might drive you in the right direction and keep you engrossed. Be it the music, the acting or the choice of scenes and the interesting narrative, the film has quite a bit to boast about and is not a restriction for the fans of The Beatles alone. With enough finesse for the general audiences Yesterday is a worthy watch with some nostalgia for fans of music and art.

Bottomline: Barring the barest of margins that would bring down the overall impact, ‘Yesterday’ is an enticing musical, fantasy - based comedy film, with a tinge of select yet intense moments!