Movie Review: Aladdin and the Genie enchant us with their wizardry! 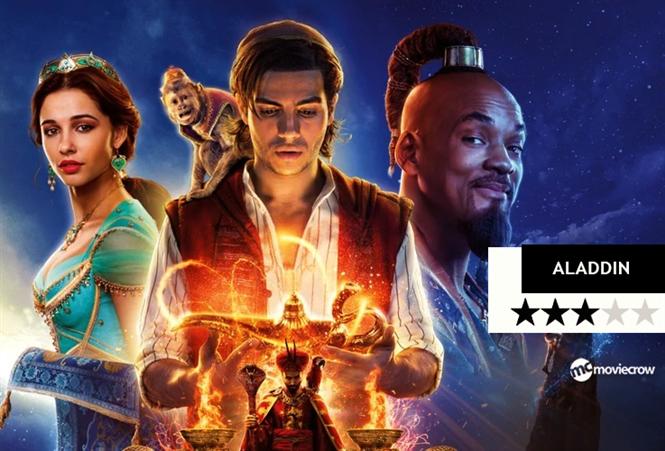 Aladdin and the Genie enchant us with their wizardry!

The classic tale of Aladdin and his magic lamp has found its way to the movies with director Guy Ritchie helming the musical fantasy based adventure project. As we have all heard and read about the story of Aladdin, it is quite interesting and fascinating for most audiences to step into the theatres and experience the lovely magic. Has the film lived up to the classic’s expectations and kept us enthralled?

Aladdin is a young street thief who aspires to do something big in life but he is left stranded with his loyal monkey friend Abu with no means to make it even close to big due to the accident of being born as a poor orphan which wasn’t in his control. Princess Jasmine from the royal palace happens to take a stroll out of her premises and stumbles upon Aladdin at the market. The bond they build is quite naturally portrayed and the actors have done a good job in accomplishing that. Naomi Scott as Princess Jasmine is beautiful and emotes very well holding one’s attention on screen well complimented by Mena who plays Aladdin.

But what forms as the biggest USP of this film is the super energetic Genie played by the ravishing performer Will Smith. The moment he appears on screen, he sets it on fire with his charisma and the energy levels just shoot up. Jafar is a cunning sorcerer in the Kingdom of Agrabah and he wishes to become the next Sultan and conquer many a kingdom for his glory. However, a bold princess wishes to do good for her people by becoming the Sultan but finds it hard to convince anyone part of the royal family, which includes her father. How this is accomplished and what Aladdin and the Genie set out to do in order to set things straight forms the rest of the story.

As we all might have read, the magic lamp offers 3 wishes and the Genie will accept the master’s wishes without second thoughts. But what sets Aladdin’s character apart is his innocence and vengeance-less wishing every time he wishes for something. In fact, there is a nice surprise with the third wish and though this is very predictable, the emotion between Will Smith as the Genie and Aladdin work. Their chemistry in the scene where they disguise themselves as Prince Ali from Ababwa are hilarious and these sequences are sure to be cheered for by majority of the crowd.

A lot of light moments with the usual storyline of Aladdin and his magic lamp and some lively sequences are what one can expect from this sort of a film. Being a picture produced by the Disney house, one can obviously expect the feel-good and pleasing factor. But what happens in the process is a predictable last 20 odd minutes that might bore a few sectors of the audiences.

Also, the idea of a musical film seems very interesting at the start and the very first track titled ‘Arabian Nights’ is so intense. But when one has to witness the entire storytelling at the fag end of the film with the help of a song sung by the princess, patience does go for a toss. A quicker cut to the chase would have definitely spiced up the climax.

Also, who can forget the magic carpet? This brings us to the technical aspects of the film and the VFX is top class. The scenes that have the magic carpet are a stand out and cinematography Alan Stewart combined with Alan Menken’s music are a sure-shot hit combo. Even the edit does seem decent and the cuts used in certain sequences are slick. The best part about fantasy films are that there is no worry about the logic aspect. Hence most scenes would seem convincing if they are well planned and shot. This is exactly what gets Aladdin above the water and Will Smith just takes it one step further with the cracker of a performer that he is.

Some mention worthy scenes include the initial chase to establish the title characters, the Genie’s introduction and song, the underwater sequence, the glacier scene and definitely the romance between Aladdin and Princess Jasmine that seemed quite natural. What could have been better is a better face off between Jafar and Aladdin and a more intriguing screenplay towards the fag end. Sans this predictability and some glitches towards the very end, Alladin the movie is an entertaining ride on the magic carpet with the right dosage of emotions and enhanced technical aspects!

Go for it for its execution and enhanced technical aspects! A tested tale packaged pretty well!