The promos made you aware that Soodhu Kavvum is going to be a different experience. And it does not disappoint. This debut vehicle of Nalan Kumarasamy marks the arrival of a talented filmmaker. Quirky humour is a path less traversed by Tamil Cinema and Soodhu Kavvum not only takes this difficult path but also comes out on top.

Three jobless youngsters happen to meet a middle aged man Dass(Vijay Sethupathy) and his nonexistent girlfriend!!!(Sanchitha Shetty). Now Dass is not your regular guy. He probably has a disturbed past that is cleverly not revealed anywhere in the film. He specialises in small time kidnapping. He has his own set of rules a la Jason Statham of Transporter. The primary and most important among them is not to get involved with influential people. The four people together now take up an assignment for a hefty sum that throws away this primary rule to the cleaners. Now they are on the run being chased by a dreaded policeman.

Vijay Sethupathy is probably the best thing to have happened for Tamil cinema in the recent times. He seems to have an amazing script sense and Soodhu Kavvum reiterates this fact. While most actors yearn to look younger on screen this man does exactly the opposite and comes up with a brilliant nonchalant performance. The three youngsters too play their parts well. Particularly Simha as the innocent guy among the lot and RJ Ramesh Thilak are responsible for many a laughter. Karuna Karan as the crooked youngster once again proves his potential. Sanchitha Shetty is easy on the eye and adequate. The rest of the cast that includes M.S.Bhaskar,Radha Ravi and Yog Japee also fit the bill perfectly.

Santosh Narayanan makes an impact with his background score. The theme music is top notch. The songs too are definitely not the regular mundane stuff. But at the same time they do not bowl you over either. The technical team of Dinesh Krishnan (camera) and Leo John Paul (editing) has done a neat job. The CG work in the interval scene is amateurish and definitely should have been better.

Nalan Kumarasamy has definitely proved that he is a man to watch out far. He seems to have a command over the medium. The humour is fresh and clean. They strike you at the most unlikeliest of places. The instance where the protagonists laugh their hearts out when they are being beaten to pulp is one such.  The screenplay of Soodhu Kavvum is definitely a winner. Despite a relatively simple plot you cannot often judge as to what is going to happen next.

The handling of songs could have been better. The 'Kasu Panam' song with its music album kind of choreography seems out of place. The only grudge (if you can call it that) you can possibly have about the film is that it could send a wrong signal to a few. While the film depicts the reality of the political world and how honesty is not valued anywhere, one hopes that it does not demotivate people who want to make it big the right way.

'Soodhu Kavvum' once again proves that content and presentation are the key. It is definitely a gamble worth taking. 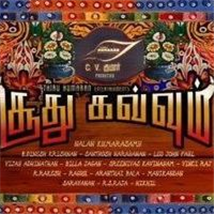