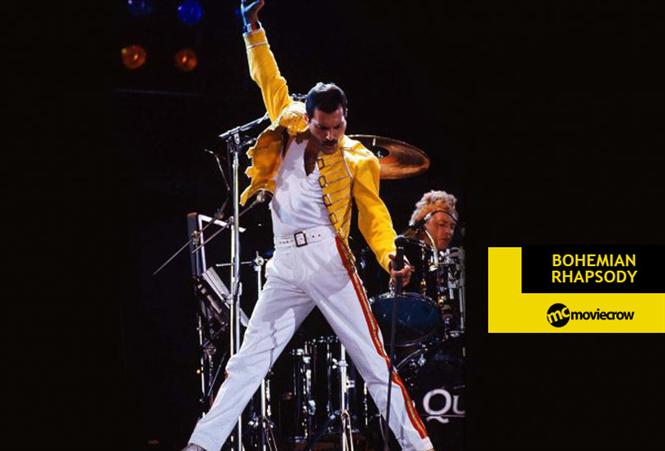 In one moving scene in Bohemian Rhapsody, Freddie Mercury, when warned by his ex-wife that he is burning both the ends of a candle.. he says something that could echo over the spirits of every lone legend who made it to the freaking peaks.. every great artist who foresaw their fall.. 'BUT THE GLOW IS DIVINE'.

Bohemian Rhapsody is like a tragic Greek choir that outlines the fatal life of Freddie Mercury, the lead singer of the iconic band, Queen. The film has an approach like they underlined in the trailers.. 'The only thing more interesting than their music is his life!'. With terrific performances by all the characters, the film is an ensemble of many stunning crafts coming together to give one and all a nostalgic, look back experience of a lifetime!

The mood of the film is celebrative.. yet gloomy! Here is the story that's tragic! Yet the energy at which it's been narrated is high AF! The spirit of the boys that the film captures is done with a meticulous passion. And it is infectious. It connects you with Freddie Mercury, who never looked back at his decisions.. lived his life dangerously fiery! Like one of their song goes.. 'Do you think you're better every day? No, I just think I'm two steps nearer to my grave.'

Despite being the most gifted genius of his times, Freddie holds a battle within himself against his own self. Him coming in terms with his sexuality, family and basically everything other than his music turns out to be a colossal mess. In a beautiful scene when he explains that he never really know whether his audience really appreciate his music.. he hears back from them! Them singing! Hundreds and Hundreds of people in sync! Together! And he claims that it is in such moments that he can never sing off-key even if he wanted to.

The relationship he shares with Mary Austin.. his first love, his wife and a friend for the rest of his life has a beautiful graph to it. He proposes her with a ring and asks her to never remove it. And when years later, after their break-up, while Freddie is been gradually loosing track of his path, we see them meeting again. And now, she is without that ring. When Freddie asks her, she says 'I don't want to travel everywhere with something valuable like that!'. It not only means the ring but also the kind of person Freddie is. Valuable.. Too much of a possession to keep in hands all the time!

Rami Malek as Freddie Mercury comes up with a highly vulnerable performance. He hits it out of the chords in bringing out Freddie's loneliness, insecurities and constant quest to feel belonged to one or the other. The incisor tooth crumbling his words along with the constant wavering agony in his eyes tells one all that you wanna feel for this man. Even one single moment like when a loud, roof shattering gay party goes on his basement.. him spending his night all alone in stairs delivers so much!

The sound of the film really thumps within the chambers of your heart for hours! In one sequence when a band member explains the idea of the iconic 'We will Rock you' to Freddie.. he asks him to imagine how magnificent it would sound if thousands and thousands of people do it together. And then, we are CUT TO people actually doing it! The sonic impact the film has chiseled out to perfection literally puts you on a historical ride, discovering the growth of the greatest of greats in the history of bands

The lyrical fonts and destinations they keep conquering with their music coming every now and then adds so much to the flavour of the film. The technojazzy color tone in the cinematography elevates the rock n roll mood on point. So is the editing. The pace at which sequences involving Freddie's live interaction with the audience has been cut in contrast to his lonely, melancholic nights is itself a poetic beauty on its own.

The film is technically beyond brilliance. The ambience of Live Aid concerts that Queen attended and created history is incredibly recreated. People do have complaints with many historical inaccuracies that the film blatantly blurred out.. especially about his sexuality and the time at which he had the diagnosis of AIDS. But the dramatical liberty serves the purpose in all its glory to tell us one great tale about one man.. one legend.. one band that's iconic in every way possible!