Directed by debutant director Anbazhagan, ‘Saattai’ has Samuthirakani in the pivotal role. ‘Saattai’ tries to throw light on the faulty teachers and their ideologies. We have seen films like ‘Nanban’ and ‘Dhoni’ carrying similar subjects but ‘Saattai’ focuses more on the negligent teachers and not on the education system. The movie starts off promisingly but soon turns into a long preachy message for everyone.

Dayalan (Samuthirakani) joins a school as a teacher and finds that the school is in complete disarray. Singam Perumal (Thambi Ramaiah) is the Assistant Head Master of the school and he often hinders the progress of the school. There is also a love story between Pazhani (Yuvan) and Arivazhagi (Mahima), who are 12th grade students. Dayalan faces a lot of obstacles but he returns love for hatred shown on him. He inspires students, teachers and parents, and how he manages to bring laurels to the school forms the rest of the story.

Samuthirakani, as the perfect teacher, is stupendous in his role. He has got a meaty role and he scores with his distinctive dialogue delivery and expressions. But, after a while, his lengthy dialogues turn out to be very preachy and tiresome. The saddest part of this film is Thambi Ramaiah’s characterization. He is made to look irksome and his acts along with his sidekicks are not engaging.

Yuvan and Mahima do justice to their roles while ‘Black’ Paandi provides some comic relief. Junior Balaiah does a decent job as the Head Master.

Imman’s music is an advantage to the movie. Among songs, ‘Sahaayane’ is soothing to the ears and ‘Jada Jada Jaada’ is an inspiring number. The background score blends well with the movie too. Cinematography by Jeevan is laudable and camera angles are apt for the scenes.

Debutant director Anbazhagan’s intention to convey a strong message to the faulty teachers is praiseworthy but he has not done it without flaws. The positive aspects of the film are the powerful dialogues, Imman's music and Samthurakani’s presence. On the flip side, the screenplay is over-exaggerated and the characters look very artificial.

More often than not, the messages are conveyed as five minute long dialogues by the protagonist. Also, the messages are in your face and one might think that there is too much of moral judgment attached to the dialogues. If the Director had kept the messages subtle and short, the film might have been more entertaining as well as educating.

Saattai has noble intentions, but the movie is let down by over-exaggerated and preachy screenplay. 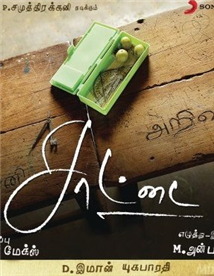