Bala is back with Ilaiyaraja in his 7th directorial venture, Tharai Thappattai, backed by actor/producer Sasikumar. The movie deservingly gets an "A" certification for all the violence and dialogues. Tharai Thappattai may live up to the expectations of Bala's brand of cinema lovers and loyal fans. However, Tharai Thappattai will not be everybody's cup of tea.

The story is set against the backdrop of the life of folk dancers and their difficult livelihoods. Varu (Sooravali) and Sasikumar (Sannasi) are dancers in love with each other. Sooravali is more expressive in her love towards Sannasi. Sannasi sacrifices his love to convince Sooravali to get married to a person with a stable government job. The true dark side of this person is revealed as Sooravali lives through hellish conditions. The hero regrettably finds out too late and takes revenge against bad people in the most gruesome manner.

Bala sticks to his usual formula of movie making with abnormal central characters faced with extreme situations reacting in unexpected fashion. All this narrated in a melodramatic manner with shocking and gruesome scenes. It is not a question of whether Bala will unleash all the misery, torture and human pain on the viewers. It is just a question of when the movie will slip in to the dark side, which is his comfort zone. Due to that, the audience will be able to predict what will happen next as the scene unfolds. That takes away the twists and intended shock value that Bala has been thriving on for many years. Bala has done it again so predictably in Tharai Thappattai with lack of subtlety and efficiency. Bala goes to extreme lengths again in this edition to show macabre violence. The screenplay has a number of speed breakers with incredulous scenes, such as the one involving Sannasi father's (GM Kumar) performance in a party filled with foreigners acting as high embassy officials. The dialogues are often raw and laced with lewd humour.

Bala's forte is unusual characterization as he dwells into the minds of these characters and portrays on the screen how they will behave in forced situations. It is not clear in Tharai Thappattai on which character Bala wants to mount the narration and flow of the story. The first half does a good job in establishing Varu's eccentric character (Sooravali) and successfully get under the skin of her character. It switches on to Sasikumar's shoulders (Sannasi) with Sooravali getting very limited screen time and dialogues in the second half.

Sasikumar's hardwork is evident as he grows long hair and has vastly improved his dancing abilities. Varu fits the character. Varu's extra pounds gives authenticity to the character she plays. Varu's energetic dance to Ilaiyaraja's fast thaarai thappatai deserves big applause. The casting of many of the key characters, including the villain, look forced and artificially enacted in important scenes.

The highlight of this movie is Ilaiyaraja and Bala's combination after Naan Kadavul. Ilaiyaraja's use of folk instruments is consistent with the subject in hand. It is indisputable that Isaignani elevates a few scenes with his background tracks, notably when Sannasi puts make-up for Sooravali before the performance. That scene is probably the most cheerful few minutes you will find in the entire movie. So, cherish it while it lasts.

Technically, cinematographer(Cheziyan) works with art director to make it feel real while maintaining the commercial look and feel. The dance choreography is excellent and serves as the lifeline of the movie. Stunt choreography during the climax fight scene successfully brings out the aggression envisioned by Bala.

A section of the audience will find Bala's Tharai Thappattai disturbingly repulsive and the rest will find pleasure out of soaking in miseries that Bala unleashes on well-prepared audience. If you identify yourself in the latter category, it is a movie aimed at you. For others in the former category, it will ruin your Pongal festive spirits. 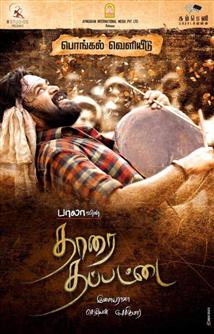