A Thirupathi Brothers‘ production certainly has a goodwill among the audience as they have a track record of being associated with quality films. At the audio launch Lingusamy assured that ‘Manjapai’ would follow suit. Does it? Read on ….

Manjapai is a simple and straightforward story narrated with minimal fuss. It is about the complications that arise in a grandfather – grandson bond where both sides are not at fault. An innocent person who is pure at heart comes to Chennai to stay with his grandson. How his well intentioned actions bring about trouble for his grandson is Manjapai for you.

This is a film which relies heavily on it’s principal cast and they do not disappoint. This is one of Vimal’s better performances in the recent past. He has cleverly avoided being artificial that backfired in the films where he tried portraying an urban and suave youngster.That said, he definitely has scope for a lot of improvement.It is Rajkiran who is the soul of Manjapai and  he does carry the film on his broad shoulders with  such warmth and sincerity. In a role that could have easily turned out to be a caricature, Rajkiran shines and makes his character so believable and lovable. Lakshmi Menon's performance does seem a little rushed and the scenes involving her sorely lack continuity with respect to her characterization.

A couple of N. R. Raghunanthan's numbers are hummable. The bgm score and some short pathos songs that make their way in the film are quite manipulative. While Rajkiran’s performance in these scenes are enough to bring about the desired impact this over melodramatic score does seem like a throwback to the nineties.

The initial 30 minutes of the film lacks a flow and the scenes move in a hasty manner failing to register in the minds of the audience. Had the love between the lead pair in this period been narrated more neatly with conviction Manjapai would have definitely gained more brownie points. You know where the film is heading from quite early on. But Rajkiran’s performance is so good that you travel with him in the film. At the audio launch Lingusamy had mentioned that the debutant director Raghavan had not made any technical advancement or a revolutionary film but a film that would be identical to a Vikraman movie in his prime. His words are so true as this is precisely the feel that we get while watching Manjapai. The humourous scenarios arising due to Rajkiran’s gullible nature are nicely done. Vimal’s characterization too is neatly maintained. His love for his grandfather is evident throughout and only when he loses something very dear to him does he react. A few amateurish sequences and the supporting characters that are used too conveniently with clichés are what reduce the weight of Manjapai.

A very simple story and Rajkiran’s superlative performance lift Manjapai high from the melodramatic clichés that try to pull it down. 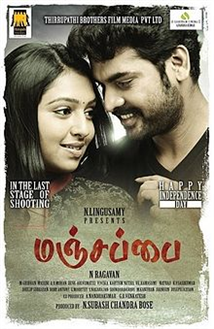