Kalyana Samayal Saadham is a highly engaging movie with refreshing narration supported by fantastic acting by the lead pairs(Prasanna and Lekha Washington). The top credits go to director RS Prasanna, for having the courage to take a taboo topic in our society and dishing out in classy style. The movie is co-produced by Arun Vaidyanathan, director of Achamundu Achamundu, and distributed by C V Kumar's Thirukumaran Entertainment.

KSS works purely on the strength of its script and performances of lead stars. The movie is set in the backdrop of Tamil Brahmin wedding keenly observed and brought to life on the screen without losing the nuances. The dialogues are natural, intelligent, lively and non-filmy in most of the places. One could tell the director has taken a lot of care in neatly connecting various layers of the script. For example, Prasanna is shown as a CSK/Dhoni facebook through his cover page and the director makes sure to tie that aptly to the last scene panning to the TV showing Dhoni's helicopter shot clearing the stands as Prasanna overcomes his challenges. The director should be lauded for keeping the movie refreshingly breezy from start to finish while walking the tight rope of handling a highly sensitive topic.

On the slightly dysfunctional side, the director shows Prasanna's problem of not able to get it up as stress related without clearly establishing it. The director takes a convenient route in the script by broadly painting the core issue faced by the hero as a generational issue. Even though there are a few imperfections in the second half and some liberties leading up to the climax, the cinematic achievement is no less compared to what "Vicky Donor" did for Hindi cinema last year.

Prasanna and Lekha Washington's on-screen chemistry is an absolute delight to watch. Prasanna should be lauded for having the *balls* to take on this difficult role, especially at a stage his career is pointing downwards. Prasanna's natural acting and likable looks make him a perfect casting choice as the protagonist. Prasanna scores in the scene when he wins over Lekha Washington. Lekha Washington enlivens the proceedings with her charming looks and spontaneous acting. The director should be credited for excellent characterization of Lekha who nicely balances the traditional values with practicality of current urban generation. Lekha shows a range of emotions effortlessly as she gains viewers votes when she shows no doubt in staying with Prasanna while acknowledging the need for having a good sex.

Delhi Ganesh as supporting father-in-law is back with a meaningful role after a long time. The casting is intelligent with Crazy Mohan pulled in for a critical scene that could have turned out to be educational if this was an unknown face lecturing about the current generational issue of stress related erectile dysfunction (ED). Some of the casting decisions such as Prasanna's father and some of his friends could have been better and selected a tad bit carefully.

Arrora's songs will climb the charts following the success of the movie. The background score is aptly done and hits the right notes bringing out the essence of the scenes. Thankfully, there are no speed-breaker songs shot in foreign locations or expensive sets. Cinematographer Krishnan Vasant's keen understanding of director's vision is evident in his mindful shot making and fluid camera movements. Sathyaraj's editing sets the right pace as he seamless transitions between scenes. The editor and director should be credited for use of some sharp cuts bring out the laughter among the audience.

The poster promotions and movie title fail to do justice to the underlying content and strong script. The production department could have opted for a better promotional strategy which may have earned better opening. We sincerely wish the movie to grow only bigger with positive word of mouth pouring in.

Not many urban movies in Tamil have done justice in portraying the metro settings convincingly and realistically. Director RS Prasanna scores big points for his refreshing narration infused with subtle emotions between lead pairs. KSS proves that you don't need truck load of money and expensive CGs to make a movie with rich production values. Please do yourself a favour and don't miss watching the light-hearted romance on big screen. 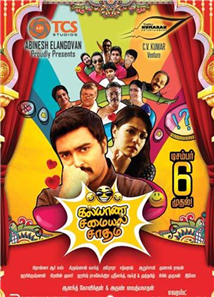