Naveena Saraswathi Sabatham -  Too Simplistic with a few laughs

We do get movies in Tamil Cinema that are christened the same as or modified from yesteryear movies. But not always the name carries significance with the plot. But Naveena Saraswathi Sabatham is aptly titled so. Times have changed drastically within the past few months in Tamil cinema with quite a few expected comedy flicks biting the dust. Will NSS be different?

As revealed in the trailer four friends decide to celebrate the bachelor party of one of them (Jai) at Bangkok. Lord Shiva decides to make them understand the ill effects of alcohol  and plays a game with them. Without realizing what happened to them all four are left stranded in an island with nowhere to go. What they do next is what NSS is about.

After an impressive outing in Raja Rani, Jai is back as the main lead with NSS. He comes up with his usual nonchalant performance and is at ease. Sathyan and Rajkumar are adequate. But it is VTV Ganesh who surprisingly steals the show. He has been given more screen presence and most of the jokes in the second half are centered around his antics. Nivetha Thomas as Jayashree is ravishing. Subbu, Dhivyadharshini and Manobala provide some fun-filled movements in the modern Shivalogam.

In Prem Kumar's composition the 'Kaathirundhai Anbe' is a delightful melody. The scenes tend to end abruptly as they keep switching between what is happening on earth and then in Shivalogam and this keeps happening throughout the film. The modern Shivalogam setting that is up to date with the latest gadgets in town is neat.

NSS basically has a solid plot, something that most comedy flicks these days lack completely. You only wish it was packed more intelligently with a lot more happenings. In the entire second half when the friends are stranded in the island almost nothing happens. NSS is a classic case where are all the prerequisites for an exciting event are set up but the event itself ends up as quite ordinary. The director could have possibly thought of more interesting scenarios in the island. When these four are desperate to save their lives it is
surprising how clean and fresh they are shown. Stranded in an island for six months you at least expect some fatigue. Even more surprising is that they are often shown shaving their facial hair and keeping themselves prim and proper, God knows for what reason. Giving messages directly to the audience towards the end of the film though with a noble intention is definitely not in sync with the taste of the current generation.

With an interesting idea NSS could have been a much better fare. It ends up being just close to average at best. 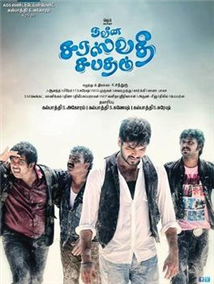