The Family Man 2 Review - Manoj and Samantha sizzle in this cat and mouse battle! 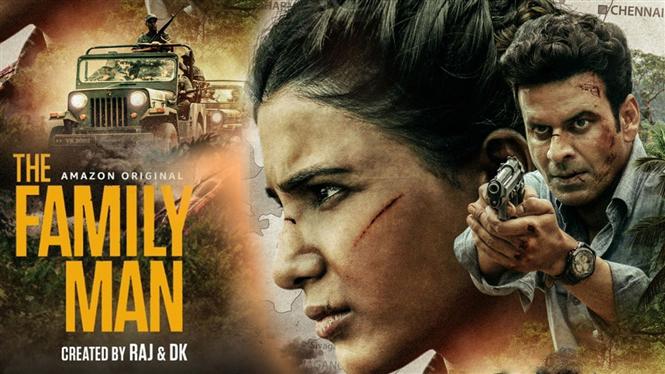 Manoj and Samantha sizzle in this cat and mouse battle!

The much awaited second season of the highly rated show ‘Family Man’, has dropped on Amazon Prime! Starring Manoj Bajpayee as Srikant and actress Samantha as Raji, this time around we have a whole sea of Tamil and Hindi actors in various subplots. Have directors Raj and DK guaranteed entertainment the second time around? Read further to see what it has in store for audiences.

Even before jumping into this review, let us remind you of the fact that this is one India’s most watched shows across OTT platforms and the expectation meter is already off the chart. Manoj (Srikant) has retired from his TASC job with the Government and has set out to attend a day job. He takes every step towards being the ideal ‘Family Man’ but his wife (Priyamani), is not impressed with his efforts. Simultaneously, there is a parallel track about the Sri Lankan Tamils headed by Mime Gopi (Bhaskaran) and Azhagamperumal. They have had to face a lot of struggles to survive and have had enough. Enter Samantha (Raji), a rebel warrior who is ready to go to any extent to accomplish the mission set by her Eelam team. Does Srikant get back to his duty and try to stop Raji and her gang? Or is there a massive plan against the politics of an entire nation? These are the questions that get their answers in season 2.

Even though this can be termed a cat and mouse battle between two characters, Family Man Season 2 gets its soul from a lot of other supporting characters. As for the casting, Manoj and Samantha ace their parts and this is no surprise. Since a large part of the story is set in Chennai, a lot of Tamil actors including Mime Gopi, Devadharshini, Azhagamperumal to name a few get the meat. They have done well and have the characters that accompany Srikant and Raji in their respective missions. Special mention to Dhriti and her boyfriend whose sub plot had an interesting touch upon teenage relationships and their dangers these days. Full marks to the casting equation.

Right from the word go, the makers have ensured to provide a wholesome ride with a lot of entertainment. Within the first couple of episodes, we get introduced to a lot of important details and characters but the series takes its own course of time to give us ‘Raji’ and her plan. This is a conscious move to hold the audiences and one might say this has gone both ways. As much as we want to have the suspense intact, we also do not want to feel like we waited too long for it. But what makes up for this is the detailing that the team has given. What could have been a challenging task of having to maintain a realistic look and feel for the series, that shifts its geography between London, Tamil Nadu, Sri Lanka and New Delhi seems to have been achieved with ease. This is pure research and effort from the team’s end that deserves applause.

Family Man Season 2 is high on action and emotions. As you can say, the only form of humour is that of Sharib Hashmi and another Tamil police officer. Special mention to the shootout sequences shot within the police station as they were quite innovatively canned. The series touches upon a lot of aspects like domestic abuse against women at a workplace, the plight of Sri Lankan Tamils and the convenient ways of those in power. How all this is woven into a cat and mouse battle forms for this season.

As for the technicalities, cinematography by Cameron Eric Bryson is the sail of this ship. Right from natural angles, lighting to capturing fight sequences in an impactfully believable manner, his department scores full marks. The edit could have been a little tighter at points and a few sequences could have been done away with. Music by Ketan adds value and so does the action by the team of Aejaz and Yannick. Overall, a technically sound product is on offer for fans.

On the whole, this second season of Family Man is Manoj Bajpayee and Samantha’s show well supported by some good performances by most of the supporting actors. Even though there is predictability at some points, the engagement does prevail and sails the ship to its dock. Gripping fight sequences, an interesting layer about the Sri Lankan Tamils and some native vibes for the people of Tamil Nadu would attract fans without doubt. Directors Raj and DK strike a chord second time in a row!

Verdict: Yet another majorly gripping outing, for the ‘Family Man’ franchise! A worthy watch for fans!