Letter to CM M.K. Stalin - From Vijay Sethupathi, Vetrimaaran & 65 others! 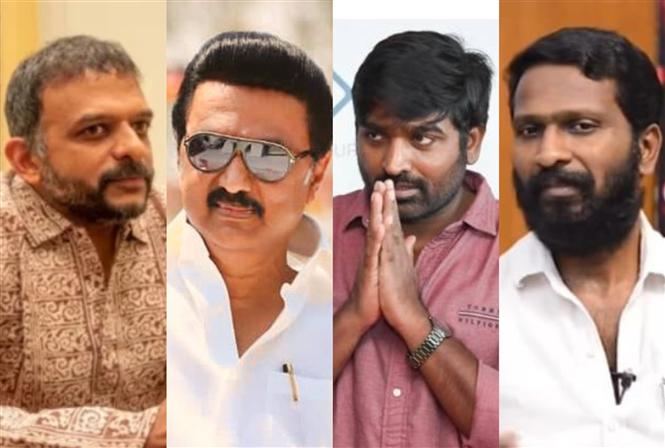 The Tamil Nadu Assembly elections 2021 saw the return of DMK to power after 10 years and DMK Chief MK Stalin is all set to take oath as Chief Minister on May 7, 2021. As Stalin prepares for his swearing-in ceremony at the Raj Bhavan on Friday, he is already being sent letters of requests that would require his attention as CM.

A group of 67 signatories including Tamil film industry's actor Vijay Sethupathi, director Vetrimaaran, director Rathindran Prasad, musician T.M. Krishna among others have listed out areas of issues and what possible solution can be brought about by the CM.

Congratulations to you for steering the DMK to a victory with an absolute majority, and the progressive alliance for its commendable performance. We, the below-signed, are particularly happy that the spirit of dravidianism, inclusivity, and social justice have prevailed over religious majoritarianism, caste politics and linguistic purism. We will support the government’s efforts to assert the tenet of cooperative federalism and reclaiming the rights of the state.

The COVID-19 crisis, that you have inherited, has its roots in the abuse of environment in the name of land-degrading infrastructure development, destructive industrialisation and urbanisation, and chemical- and water-intensive agriculture. But be warned that COVID-19 is merely a trailer to the looming challenges posed by the unfolding global ecological collapse. Extreme weather events like cyclones, heavy rainfall, prolonged droughts and heat waves will be the new normal. With its 1000 km coastline, Tamil Nadu will be particularly vulnerable to loss of land and salinity intrusion due to sea level rise. The state’s vulnerabilities to these natural events and phenomena will be aggravated if we fail to stop the abuse of our land.

Your alliance partners are ideologically aligned with the values of diversity, equity and environmental sustainability, and include parties like VCK, MDMK, MMK and the Left Parties, that have spoken out boldly against environmental discrimination and injustices. At a time when development needs a reorientation and the country needs strong environmental laws, the Union government is busy diluting the meagre protections offered by the laws such as EIA Notification and Coastal Regulation Zone Notification.

Environmental degradation hurts women, the poor, the historically marginalised communities, the farmers and fishworkers disproportionately. To remain true to its values of social justice and equity, Tamil Nadu has to evolve stricter laws and better environmental due diligence to make up for the lack of it in the central laws.

Specifically, we wish to urge you to ensure the following:

a) The Vedanta copper smelter in Thoothukudi should not be allowed to reopen, and the company and its directors should be prosecuted for their environmental crimes.

c) Withdraw the previous government’s request for denotification of Vedanthangal Sanctuary, and for the reduction of protective buffer for the Pulicat Sanctuary.

e) Prohibit use of Genetically Engineered seeds in Tamil Nadu.

f) Bring in a comprehensive groundwater legislation with stringent norms to limit commercial extraction and use.

g) Evolve comprehensive policies against forced eviction of economically disadvantaged urban communities to distant and often environmentally vulnerable areas, and for environmental and waterbody restoration that is socially inclusive and prioritises the urban aspirations of the city’s poor.

h) Enact state-level laws to strengthen and realise the objectives of the CRZ and EIA Notifications.

i) Strengthen and build capacity among panchayat- and ward-level committees to monitor and act against environmentally degrading practices within their jurisdiction.

k) Strengthen the pledge against hydrocarbon exploitation in the delta by including all delta districts and all hydrocarbon activity, including refining and processing.

l) Develop district-level economic and environmental conservation plans for hill districts to safeguard the ecological integrity of the Western and Eastern Ghats, which are sources of Tamil Nadu’s life-giving rivers.

m) Promote decentralised, small-scale renewable energy systems and announce an end to all proposed and in-the-pipeline coal thermal power projects in the state.

n) Strengthen the process of public consultation and participation in environmental decision-making particularly in relation to infrastructure and industrial projects.

As members of the civil society, we will continue to play a watchdog role even as we extend our support for the government’s efforts towards environmental justice.