Almost every other film in Tamil Cinema glorifies love. So when a film with 'love' as a part of it's title actually speaks the negative impacts of hasty love it is natural to sit up and take notice. After tackling various genres in his previous four ventures Suseentharan takes up an urban middle class romance and makes it worthwhile with a hard hitting climax in Aadhalal Kadhal Seiveer (AKS)

Karthik ( debutant Santosh) is in love with his college mate Swetha (Manisha Yadav) . She snubs him at the start only to reciprocate his love very soon. They get physically intimate soon after and face the repercussions of their untimely act. Though a very thin line, Suseentharan explores the vulnerabilities of  love in today's times and drives home a much needed message.

It takes a while for us to accept newcomer Santosh as the film's leading man. But you realize that it is an apt casting as the film rolls on. Almost nothing is cinematic about AKS and Santosh fits the bill perfectly as the impatient youngster who reacts in haste for everything including love. AKS is a good follow up to Vazhakku En 18/9 for Manisha Yadav. The young girl is impressive again and it is good to see her take up roles with substance. Jayaprakash and Tulasi as the doting parents of Manisha are top notch. They seem so natural and each has at least one scene to capture our attention with their acting prowess. The rest of the cast is equally good.

Yuvan Shankar Raja comes up with a captivating background score. The song in the climax elevates the the extent of impression the scene has on you. The title song is a Yuvan special that you keep humming in your mind.Editing by Antony is neat. With a running time of less than two hours the film is slick with not many redundant scenes.The crisp length of AKS is a huge plus.

Direction:
Suseentharan has taken a pertinent social issue and presented it powerfully. Melodrama is a strict 'no' in AKS. You are shown the happenings on screen and the message hits you.The movie never resorts to preaching you in anyway and that is where AKS works big time. The movie shows how seemingly genuine people turn selfish when things turn murky for them. The lead pair getting physically intimate with each other does not seem to  happen in a moment of unexpected excitement. In fact in the previous scene there is a dialogue which suggests that they are planning for the same. Hence it is a bit hard to believe that they did not find it necessary to take the required precautions. Other than this you really cannot find any blemish in AKS.

Bottomline:
After a minor slip in Rajapaatai, Suseentharan is back big time with Aadhalal Kadhal Seiveer . AKS is a must watch.
Verdict : 3.75/5 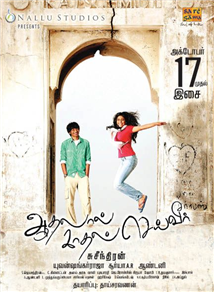