Saif Ali Khan says he was a victim of nepotism too! Internet agrees to disagree! 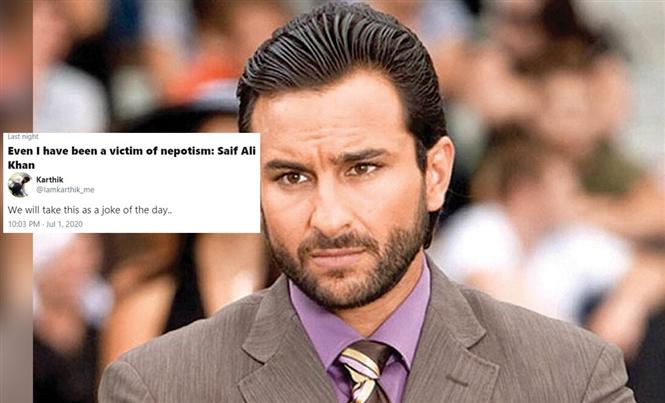 Since the unfortunate demise of Bollywood actor Sushant Singh Rajput, the general Bollywood audience has not taken too kindly to the much talked about nepotism in the Hindi film industry and for over half-a-month many prominent celebrity names have come under scrutiny for either having encouraged nepotism or having benefited from it.

At such a sensitive time for the topic, industry insider Saif Ali Khan who comes from the lineage of veteran actress Sharmila Tagore, was once married to star-actress Amrita Singh and has an actress-daughter named Sara Ali Khan has stated that he too was once a "victim of nepotism". In a video interview with a news channel, Saif while talking about the topic said,

"Nepotism in its purest form is something even I have been a victim of but nobody's interested in..I'm not gonna take names but somebody's dad has called up (the film's producer) and said take him (their actor-son) and not him (Saif Ali Khan).."

Needless to say Saif's example didnt sit well with the netizens and they were quick to point out how much more he has gained from nepotism than he had to complain about.

We will take this as a joke of the day..

Saif Ali khan tries to portray himself as honest in interviews. I want a journalist to once ask him if he really thought he deserved national award for Hum Tum.

#SaifAliKhan got padam shri because of his mother and still complaining about #Nepotism pic.twitter.com/W3g6TexTym

Saif Ali Khan says he is a victim of Nepotism, then Sara Ali khan is definitely a victim of her acting skills! 🙈😂

2010 : Saif Ali Khan was felicitated with the Padma Shri, India's fourth highest civilian award. Interestingly his mother and former actress Sharmila Tagore was serving as the chairperson of the Central Board of Film Certification when he was awarded the honour.#SaifAliKhan pic.twitter.com/AiD2LtGmHm

On the complete unrelated note, Sharmila Tagore was the prominent member of jury for National Award that time. pic.twitter.com/AfHShpsTPF

Yeah but we want the stars to acknowledge, apologize and get involved in shunning nepotism. Just like Justin Trudeau did after his black face pictures surfaced. Even I was confused about this a few days back. Hope this helps 😀#CBIMustForSushant