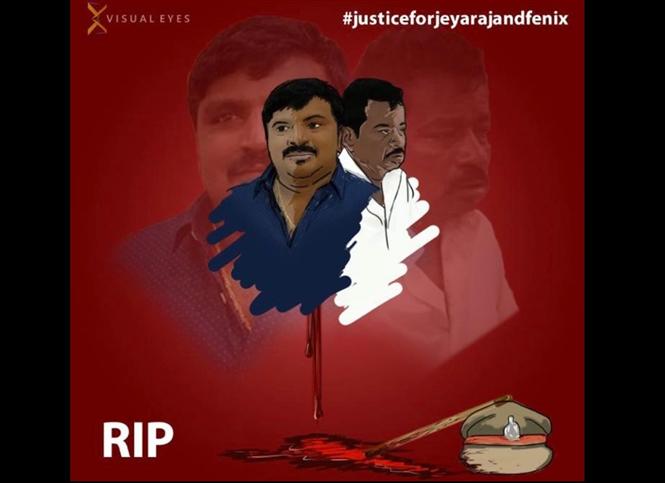 The custodial death of two traders in Sathankulam, Tuticorin has created an uproar after gory details of police brutality that ended in the demise of father-son duo Jayaraj and Fenix, started surfacing. 60-year-old Jayaraj and his 30 year old son Fenix were detained by the Thoothukudi police on Monday night following an altercation over keeping Fenix's mobile phone shop open beyond permissible hours during the lockdown.

The violent and inhumane treatment of these two people by two sub-inspectors resulted in their eventual death, which was protested against by the surviving family and the Traders' association in the city. Though the sub-inspectors were placed under suspension and post-mortem of Jayaraj and Fenix was done with video monitoring, prominent members of the political circle were not satisfied with the suo-moto inquiry the Madurai Bench of Madras High court ordered into the case.

The Kollywood circle has now joined the amplifying voices in demanding justice and several names have expressed their outrage through their social media pages.

All this for a petty crime of keeping their shops open beyond the permissible time? #PoliceReform - a need of the hour.#JusticeForJeyarajAndFenix #CustodialDeath #PoliceBrutality #Tuticorin https://t.co/T0UKNAEvAC

Terrified to hear the brutality inflicted upon Jeyaraj & Fenix.
Totally inhuman and couldn’t digest the torture they must’ve gone thru.Let’s raise our voices for this ruthless act India! Jeyaraj and Fenix are the George Floyd of India.#JusticeForJeyarajAndFenix

The people behind this are much worse than rapists . Want an insult these maniacs have caused to our police department & country.They deserved to be charged much more than just murder. No one can be trusted. Shame on humanity.https://t.co/XuFn6GHib9 pic.twitter.com/8QWzIiOM61

What happened in Saththankulam is HORRIBLE!! Insult to Humanism... The accused officials needs to be Punished and Justice has to be given to those poor souls.... Some Humans are more dangerous than Viruses!!#JusticeForJeyarajAndFenix

#JusticeForJeyarajAndFenix PERIOD !!!!!! Atrocious is the word for this most inhuman horrific act !! pic.twitter.com/F5ujsUg5X8

HORRIFIED to hear of the brutality inflicted upon Jeyaraj & Fenix in #Sathankulam
May they R.I.P.
This is NOT the work of Good and Honest police men who uphold Justice, Law & Order.
This is the work of a few sadistic and barbaric criminals in uniform!#JusticeForJeyarajAndFenix

Will we and can we see law taking its course and punishing the guilty without any further delay in #Jeyaraj and #Fenix case? The culprits cannot and should not get away. A family has lost their most loved ones. Justice delayed is justice denied. #JusticeForJeyarajAndFenix

Totally inhuman💔 #JusticeForJeyarajAndFenix
Brutality faced by jeyaraj and Fenix lower middle class who lives in saathaankulam bec of police😢No one should have this much power over other lives!now it’s time to show our outrage against this culprits😢they need to be punished😢 pic.twitter.com/oXmYK9o8Ad

No justice no peace😔💔.. This happened in Saththankulam is really Terrific.. The accused Police officers must be punished.. These humans are Curse to earth🤦!!
" Delay In Justice Is Injustice ".. So the Officials must take an Quick Action 🙏🙏#JusticeForJeyarajAndFenix

#JusticeForJeyarajAndFenix No one is above the law, justice must be done for this inhuman act.

Terrified to hear the brutality inflicted upon Jeyaraj and Fenix !Wat an insult these maniacs hv caused 2 our police department &country
The culprits cannot &should not get https://t.co/7YdGX9hyvG front of the law every1 is the same justice must b done #JusticeForJeyarajAndFenix

All I can do is to type a few lines in my phone post it here and get back to my work ..knowing that this won't bring them back and will no way hurt the killers.. showing my anger here is a waste of time still I do that just for the sake of doing.. pic.twitter.com/k1hi802eVW

I am so glad that so many of my fellow colleagues in the industry are speaking up about the Thoothukudi issue !
Thank u guys 🙏🏻
This issue needs attention #JusticeForJeyarajAndFenix https://t.co/xsOeCvq8CT