"Mersal was double of Theri: Bigil will be triple of Mersal" - Director Atlee 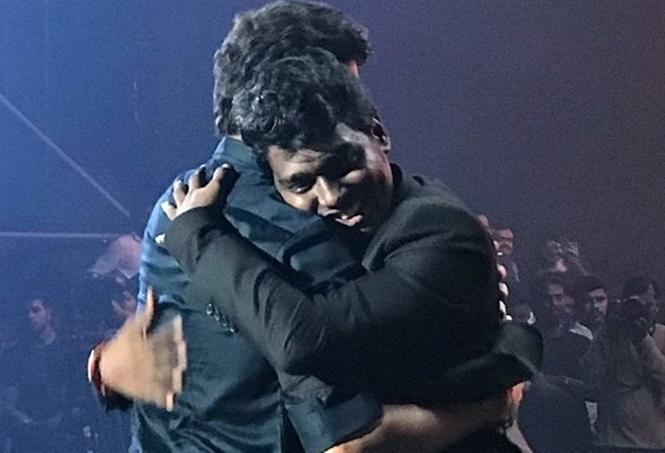 The much awaited event of this season -Bigil Audio launch is happening with a much celebrated spirit by Thalapathy fans. While everyone who have worked in the film have been sharing their experience, Director Atlee’s speech has been offering lots of enthusiastic feel for the fans. He said, “Every time, when I decide to make a film For Thalapathy Anna, my veins get infested with fever that only I should be delivering the best mass appeal factors for him. Mersal was the double of Theri and Bigil will be the triple of Mersal.”

When anchor Ramya questioned Atlee whether Bigil is a sports based film or a commercial one, he answered with a question mode asking her back, “Is Ghilli a sports film or commercial movie?”

He also thanked Archana Kalpathi saying that both of them used to fight a lot and sooner became like brother-sister. “Whenever issues popped up, we would go towards dad Aghoram sir for solution.”

He continued to speak about the film saying, We are nothing without women and they are stronger than we think. I have given my best into this film and felt that a stronger voice like Thalapathy Vijay will have more impact on the crowds. I haven’t tried anything like Dangal or Chak De India, but just limited with state level games. Myself and my wife Priya went for a local domestic match of women football, where we saw just 5 spectators. I wanted that scenario to transform into a Barcelona like ambience and that’s how Bigil originated.”

Bringing in a fun factor, which sparked off mass moment as well, Atlee said that while narrating the script oh Raja Rani, he wore a shirt feeling it to be lucky and wore the same for Theri. It didn’t fit him for Mersal and he changed to a different dress. Only then he realized that shirt wasn’t the lucky factor but it was Thalapathy Vijay. “Whenever, I write a script, I can’t think of anyone other than Vijay Anna.  For being one of the country’s best dancer and actors, I have no idea of working with anyone else and I avoided many big offers even after the success ofMersal.” He didn’t miss to share his thoughts on criticisms and memes made him.

“I often come across the criticisms claiming me to be a copycat director. But my intention is make movies for them as well and win their hearts. I have also come across some comments on my skin color while I was watching match sitting next to SRK. Even the terms like Black and White have been commonly used on me. But I would like to make it clear that just like Hindi and Tamil are languages, black is a color.”