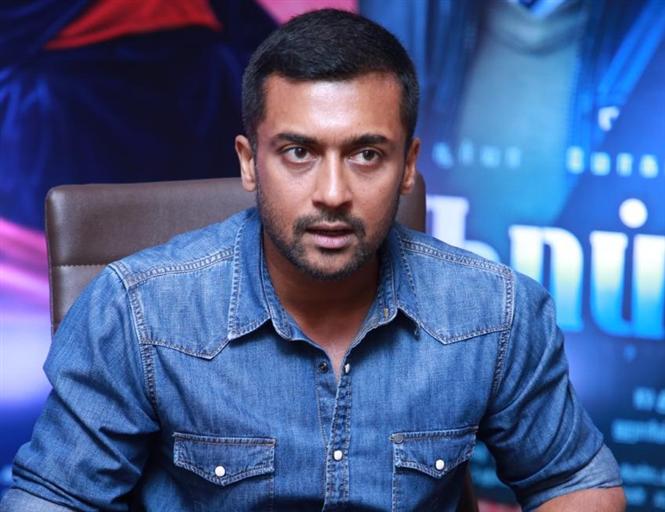 With Suriya’s Kaappaan simultaneously getting released in Tamil and Telugu on September 20, 2019, the entire team was present herein Chennai last evening for a pre-release event. It commenced with the screening of new trailer and Hey Amigo video song for the press and media following which, the cast and crew shared their experience working on this project.

Here are some of the excerpts from the event.

Actor Suriya said, “I have always wanted to do films, which are based on the lives of people, especially about the unsung heroes. I am happy that I have been able to bring out the lives of group of people under spotlights. The film is produced at a high scale. I have always enjoyed a small luck at many point of times in my career. Whenever a film gets rejected by another actor, it eventually comes to me and works out best results for me. Kaappaan belongs to the same category, where it was initially offered to some other actor, but I feel lucky enough to have got it. I am really enthralled about the way Anthony has edited couple of trailers crisply without unveiling the film’s premise. I must really admit the fact about Arya’s genuineness and discipline. He got onboard and joined us at shooting within 5 hours after signing up. It was a bottleneck situation as the actor, who had signed the project earlier couldn’t turn up at the shot on the last minute.” Having appreciated the entire team, the actor requested his fans not to erect banners and hoardings following the gruesome death of 23-yr old Subashri saying, “Whenever a film releases, there will be lots of celebrations, cut-outs and banner.  I am requesting my fans not to do such things anymore. Please continue the philanthropic works instead like blood donations.”

Director KV Anand said, “Harris Jayaraj has given excellent songs for this film. I have always admired and liked his unconditional efforts in enhancing the film’s impact through his BGM. In particular, the emotions that are escalated even through his single note. Currently, he is working on 7.1 mixing and that’s the reason, he couldn’t come here for the occasion. Suriya is someone, who doesn’t prefer taking up roles that are comfortable to perform, but is always keen on picking the challenging ones. It has been so much evident with my films  Ayan, Maattraan and now Kaappaan. I am so much surprised to see that his efforts keep increasing more and more with each project in spite of achieving a stature of a successful actor. Sayyeshaa is such an amazing artiste. Whenever, I would narrate her a scene, she will instantly grasp and emote perfectly. She plays the role of a North Indian girl and has befittingly looked perfect for this character. There are around 3000 SPG commandos in our country, who risk their lives for the sake of protecting our leaders, but still remain as unsung heroes. There have been lots of movies based on cops and military personnel, but not on them. So this was the major reason behind making a story on them.”

Actress Sayyeshaa said, “I am really happy to be a part of Kaappaan as KV Anand sir always writes strong female characters, which becomes a memorable and all time cherry pick of actresses, who perform them. Working with Suriya sir was more like a family. Both Arya and I have a great reverence and respect for him. Suriya sir’s dedication is so much genuine ,where for even for a simple shot of opening a door, he rehearsed several times. Being such a great icon in the industry, there was no need for such efforts, but still his perfectionist gesture is so much inspiring.”

Editor Anthony said, “ The film has lots of relevance with the contemporary situations. What I really liked about the film is the characterization of Suriya and the unlimited twists and turns in the script. Although, the running length is 2hrs 42 minutes, it will do complete justice to the story keeping the audiences engaged from beginning till end.”