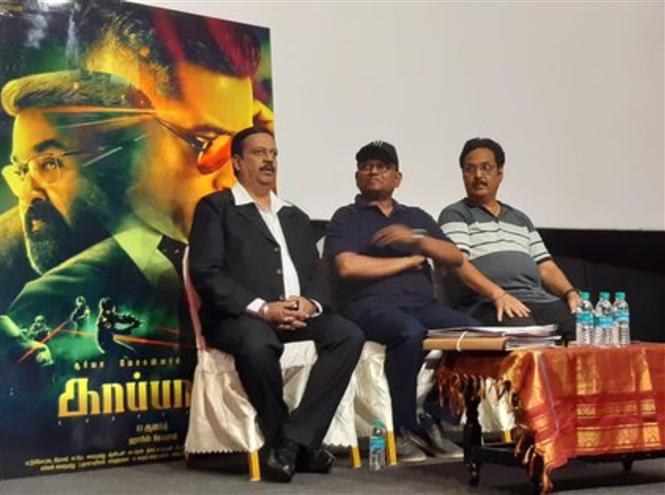 After the Madras High Court dismissed the story-theft case against K.V. Anand's upcoming film Kaappaan, the director along with his writer Pattukottai Prabhakar met with the press to explain their stance and also announce their movie further [The writers had previously refrained from commenting on the matter because of their case being sub judice].

Pattukottai Prabhakar who is one of the key writers in story-formation said that while he is happy to have gotten the legal clearance, he also is keen on filing a defamation case against John Charles, the one who accused Kaappaan of plagiarizing his script titled Saravedi.

"His (John's) story which was read by the Judge and lawyers of both sides only didn't have the concept of river water interlinking..Just because of one common word which appeared in the teaser, a case was filed, which in itself is baseless and that is what has been proved today in court as well.We are very happy about that..

But i would like to explicitly state, infact accuse that the only intention behind filing this case is its commercial aspect; because if a legal situation arises for a big film 10 days before its release, people may think that it would lead to an out-of-court settlement and the same might have been the basis for this case also.

In fact, now that this case has come to an end, the three of us - Lyca Productions, K.V. Anand and I are keen on filing a defamation suit against this fraudulent person because an example needs to be set. Many people speak of filing a defamation but do not go ahead due to the strenuous efforts it takes.. I am aware of that too ..but we cannot be letting people question our integrity, our genuineness and the name that we built over years of hard-work just like that.."

K.V. Anand who had previously expressed confidence in coming out unscathed, added that the case was filed merely on the basis of a single dialogue. John had claimed that in Saravedi, his hero questions the Prime Minister on sharing river water and in Kaappaan, too, the hero poses the same question to the PM.
John had also said that he had narrated a story about farmer’s welfare and interlinking of rivers to K.V. Anand, which the director declined to the extent of ever meeting John in person.
Pattukottai Prabhakar added in the press meet that their story has been registered since April 18, 2012 and that John's 2017 story accusation of gets debunked right there.