Dhillukku Dhuddu 2 Review - Few spurts of laughter ensure that the goal is reached! 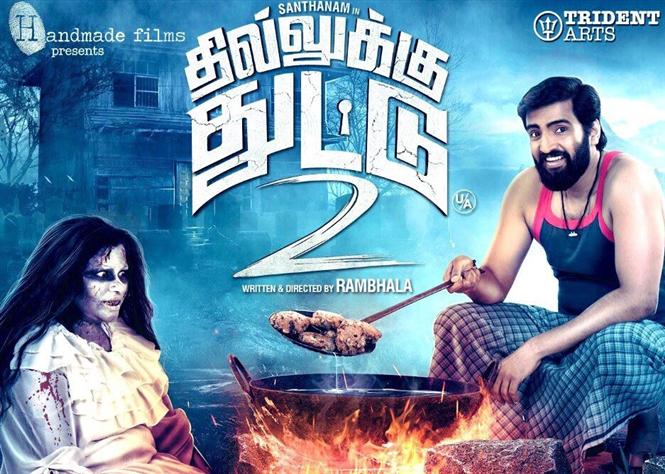 Dhillukku Dhuddu 2 Review - Few spurts of laughter ensure that the goal is reached!

Dhilluku Dhuddu 2 is that type of a film that I would compare with a T20 cricket match between two moderately talented teams. The quality of game on display might not be very good but the format would ensure that there is something to keep you entertained (provided you don't mind finesse going for a toss). Rambala gets few basics right. The runtime is just under two hours. Not much time is wasted on romance or hero glorification. He knows his strong points and the audience that he is catering to.

Santhanam returns to his former self. Though he plays the hero, his antics in DD2 are more of the type that he did playing the sidekick to other heroes. There are a few genuinely funny moments in the film – the hot water scene, the pre interval stretch and some moments in the second half. DD2 can be seen in two ways. On one hand the makers probably knew their limitations and decided to keep it simple. But it also seems they sort of settled for something very basic. There seems to be no real intent to deliver a neat film. I am not talking about the sort of buffoonery that the film indulges in. That is really the USP of the film. But a lot of things are taken for granted. Someone as good as Urvashi isn't utilised to her potential. The lip sync is painful at times. While keeping the romance, songs and stunts to a minimal is appreciable, did the film even need those songs? The laughs too aren't consistent. There are spurts of laughter towards the end of both halves of the film. But the lead up to these stretches are merely of the tolerable type.

Whether you enjoy a film like Dhillukku Dhuddu 2 would depend a lot on your sensiblites. But going by the laughter of the audience that I watched the film with, the makers certainly seemed to have achieved their goal.